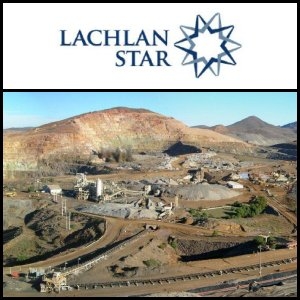 ASX:LSA) has signed a binding agreement to acquire 100% of the Compañía Minera Dayton Project in Chile. The Project is an operating open pit gold mine that commenced production in 1995 and has produced approximately 830,000 ounces of gold since operations commenced. The acquired assets include existing unhedged gold production of circa 40,000 to 50,000 ounces per annum with incumbent management. Potential exploration targets for the known mineralisation range between 53.3 Mt grading 0.65 g/t Au to 79.8 Mt grading 0.68 g/t Au containing between 1.1 million and 1.7 million ounces of gold.

ASX:AZH) announced results of the first three reverse circulation holes drilled at the Hicks prospect located on the Company's West Omai Gold Project, Guyana, South America. These are the first holes drilled as part of an 8,000 metre resource definition drilling program to define a maiden JORC code compliant resource at the Hicks prospect. Drilling intersects high grade gold mineralisation including 30m @ 7.68g/t gold. The Company has acquired drilling rigs and support equipment to expedite drilling and complete the 8,000 metre program, prior to drill testing other prospects within the West Omai Project Area.

ASX:CVX) announced a massive expansion in West African gold exploration through the signing of an Earn-In agreement with Cape Lambert Resources Limited (

ASX:CFE) giving Corvette the right to earn up to 80% interest in 5 large exploration projects covering an area in excess of 9,900km2 in Côte d'Ivoire, West Africa. The projects comprise 11 granted Exploration licences that allow exploration drilling as well as surface geochemical sampling. The company will explore with a range of drilling, geochemical and mapping programmes to commence as soon as possible.