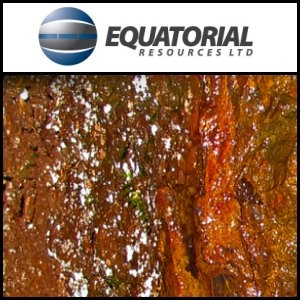 ASX:EQX) is delighted to announce that 3D and 2D modelling of the detailed high resolution aeromagnetic data collected over the Company's 100% owned Mayoko-Moussondji Iron Project ("the Project") completed by independent consultants Resource Potentials Pty Ltd has estimated a global exploration target of between 2.3 and 3.9 billion tonnes1 of iron mineralisation. Of this 500 to 900 million tonnes1 represents potentially enriched hematite cap mineralisation at an estimated grade of 40% to 65% Fe and 1.8 to 3.0 billion tonnes represents primary itabirite mineralisation at an expected grade of 30% to 45% Fe.

Mr John Welborn, Managing Director and CEO, said "We are extremely pleased by the confirmation that our Mayoko-Moussondji Iron Project has the potential to host a very large body of iron mineralisation. Most encouraging is the potential for significant tonnage of hematite cap mineralisation. This information, following the recent announcement of high grade (61.6%Fe) surface rock chip assay results, reinforces our strategy to focus our future exploration program on the rapid identification of a resource base of high grade DSO sufficient to support a start up project. This would allow Equatorial to take full benefit of our unique infrastructure advantages, existing rail and port access, while we develop the large scale long term potential of the Project."

Previous reconnaissance exploration over the Project area by BRGM in 1956, defined elevated ridges of ferruginous quartzite (itabirite) at Makengui and Lekoumou. Lekoumou has subsequently been drilled by DMC Mining Ltd (

ASX:CFE), and contains both near surface enriched supergene hematite iron mineralisation over primary bedrock itabirite iron mineralisation. The previously announced results of Equatorial's airborne geophysics program have identified a potential strike length of more than 46km. BRGM described the meta-sedimentary rock formations of the area as appearing to host itabirite iron mineralisation. This style of mineralisation is typical of West African iron ore resources and generally consists of alternating bands of magnetite and silicate which contain iron grades ranging from 25% to 45% iron. The attraction of West African itabirite ore bodies is the potential they have for low cost beneficiation into a saleable grade iron product.

Near surface weathering processes may result in the enrichment of this type of iron mineralisation into predominately hematite bodies of iron grades which make this material suitable for direct shipping ("DSO"). These weathered zones often appear as a hematite cap overlaying large magnetite rich itabirite ore bodies. The extensive zones of iron mineralisation identified at Mayoko-Moussondji by field staff and supported by airborne magnetic interpreted data indicate the potential for significant tonnage of itabirite style mineralisation.

The mineralisation over the Mayoko-Moussondji project is considered to be of a similar tenor to Cape Lambert's Mayoko Iron Ore Project, which adjoins Equatorial's project immediately to the east and contains strike extensions of magnetic anomalies defined by the new survey. Cape Lambert (CFE ASX announcement dated 14 September 2010) reported that the mineralisation can be classified into near surface in-situ (55-60% Fe) and transported (40%-60% Fe) supergene hematite, weathered and enriched itabirite (30-45% Fe) and fresh itabirite (30-36% Fe).

In addition rock chip assays from Cape Lambert's Mbinda prospect, which is the strike extension of Equatorial's Mbinda West magnetic target returned rock chip assays ranging from 32.3% to 49% Fe within weathered itabirite (DMM ASX announcement dated 12 January 2010). Recent, limited rock chip samples collected by Equatorial over Makengui, Lekoumou West, and Leboulou have returned assays ranging from 31.4% to 61.6% Fe and confirm that the mineralisation at Mayoko-Moussondji is broadly similar to that defined by Cape Lambert to the east.

The modelling was completed on data received from the Mayoko-Moussondji airborne geophysics survey flown by New Resolution Geophysics (NRG) between July and August 2010. The survey was flown on 200m lines oriented north south for a total of 5,810 line km, acquiring magnetic, radiometric and elevation data. The aeromagnetic data were subsequently processed to highlight and better define controlling structures, lithological variations and magnetic anomalies.

3D and 2D modelling was undertaken to estimate the thickness and strike length of the magnetic bodies. The modelling required the adoption of a number of assumptions. These include but are not limited to:

- The depth extent (fixed to 250m) and the width of these magnetic anomalies remain constant over their entire length;

- The depth extent of the potential enriched cap has been calculated as the difference between ground level as defined by the aeromagnetic survey and the depth to the top of the model;

- The specific gravity of the itabirite/enriched hematite is 3.5t/m;

- The magnetic susceptibility of the weathered itabirite/itabirite is 1SI.

The 2D modelling completed has created simple tabular bodies to represent the magnetic sources. These provide reasonable estimates, but will not be accurate to local variations in the geology and its affect on the magnetic response.

Overall, the 2D models compare very well to the 3D inversion and validate the result. The strike length and widths of the 2D models are generally less than the representative 3D inversion wireframe selected and may more accurately represent the true width and length of the actual magnetic source. It should be noted that only the stronger magnetic anomalies at Mavendi and Mbinda West were modelled. As such there remains significant strike extent of low magnetic responses (>10km) that are not included in the global exploration target estimate.

An exploration target for itabirite and hematite mineralisation has been estimated based on the modelling results presented here and is based on a number of assumptions and limitations and is conceptual in nature. It is not an indication of a mineral resource estimate in accordance with the JORC code and it is uncertain if further exploration will result in the determination of a mineral resource.

Equatorial is building a unique competitive advantage amongst West African Iron Ore explorers due to the exploration potential of its tenements for large high grade deposits and its access to transport infrastructure.

To capitalise on these advantages Equatorial is planning a drilling campaign to commence early in 2011 focused initially on validating the extent and grade of the potential hematite cap iron mineralisation at the Makengui Prospect. The large exploration target and potential for significant "hematite cap" support Equatorial's focus on rapidly identifying DSO and developing a start up project based on the Company's access to existing rail and port facilities.

The Mayoko-Moussondji Iron Project is located in the south west region of the ROC. The results of Equatorial's airborne geophysical survey have identified magnetic anomalies with a combined strike length of in excess of 46km prospective for hematite and magnetite rich itabirite-hosted iron mineralisation.

The project has ideal access to infrastructure with a fully operational railway line passing directly through the Project and running directly to the deep water port of Pointe-Noire. Equatorial signed an agreement with the state owned railway company granting the Company immediate access to the railway and setting the framework for a future 25 year user agreement.

This railway was originally designed and operated by Comilog for the heavy haulage of manganese ore, but is currently only being used for a weekly passenger service. The presence of an operational railway connecting the Project directly to existing deep-water port facilities provides a valuable transport and shipping solution for future iron ore production.

Badondo is located within a regional cluster of large-scale iron ore exploration projects in the North West region of the Republic of Congo including:

Work carried out by BRGM in 2007 confirmed a ridge line of more than 7km long of outcropping iron ore mineralisation and also identified the possibility of a second layer of iron ore, oriented parallel to the main ridge.

For the full announcement including figures, please refer to the following link: 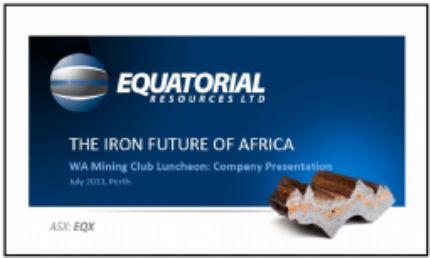