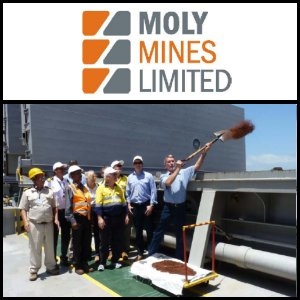 TSE:MOL) announced that the first shipment of 54,500 tonnes of iron ore from the Spinifex Ridge Iron Ore Project has left Utah Point in Port Hedland heading for China. The vessel is carrying iron ore cargo to the value of approximately US$7.9 million at today's iron ore prices. The ore has been sold to Hanlong Metals Limited.

ASX:LCT), a global company pioneering the development of a cell implant to treat diabetes, has entered into a Share Purchase and Convertible Security Agreement with SpringTree Special Opportunities Fund, LP for total funding of up to A$5,750,000. This funding is to provide funds toward the further development and commercialisation of the company's lead product DIABECELL in the treatment of Type 1 diabetes and for general operations.

ASX:OMH) announced that its wholly-owned subsidiary OM Materials (Johor) Sdn Bhd has entered into a Sale and Purchase Agreement in relation to the acquisition of land fundamental for establishing a 40 hectares sintering and smelting plant in West Malaysia. The total consideration for acquiring the 60 year leasehold land is approximately US$21 million and plant development is expected to occur by mid-2011.