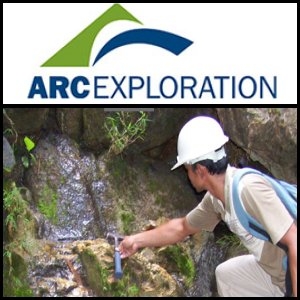 ASX:ARX) reported further highly encouraging gold results from an ongoing programme of trenching at its Baku Hill Prospect at Bima Project in Indonesia. The best result is 12m at 24.8 g/t gold that includes 3m at 64 g/t gold. Results so far at Baku Hill indicate high grade veins within a coherent gold-mineralised zone that is at least 300m long and approximately 100m wide, highlighting the bulk tonnage gold potential of the area.

ASX:GBE) said that a limited rock-chip sampling program has identified numerous additional areas of heavy rare earth mineralisation at the Mount Muambe Fluorite Project in Tete Province, Mozambique. Many of the samples show high HREO grades and ratios of the sought after elements dysprosium (Dy2O3) and europium (Eu2O3). Results include: a peak value of 1.22% TREO, a peak value of 426ppm Dy2O3 and a peak value of 198ppm Eu2O3. The company is planning a significant REO exploration program planned for Mount Muambe in 2011.

ASX:EVE) has completed a new resource estimate for the Aurora uranium deposit located in southeast Oregon, USA. The Aurora resource estimate has more than doubled, now standing at 37.9 Mlb U3O8. The new resource is based on validated historical drilling, assay and radiometric logging data obtained by Energy Ventures. A diamond drilling programme is currently in progress to further validate the geology and resource model for the deposit and to obtain samples for metallurgical testing.