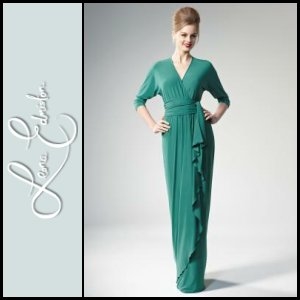 ASX:MYR) concessions to her network.

The womenswear designer will open concessions in Myer Bondi Junction, Sydney and Myer Chadstone, Melbourne, in the coming months. The brand will then have seven concessions within Myer department stores nationally.

Edmiston, known for her dress designs, launched an international boutique in the Times Square Complex, Shanghai in December 2010.

"We sell the same collection [in Shanghai] as we sell in London," she said. "I adapt my designs from our current collections to suit the climate."

The designer also operates international stores in London and Los Angeles, as well as 18 stores across Australia. During the recent Queensland floods, Edmiston was forced to close her Queensland boutiques for a few days, but said she was unaffected by water damage.

Edmiston launched a tween offer called Miss Leona into Myer stores for spring/summer 2010/11. The collection was an extension of the Little Leona arm, with sizes ranging from eight to 16.

"It has proven really successful so far, with the sales exceeding that of Little Leona in its first season," she said.

For more information on Leona Edmiston including Store Locations, Collections and Online Boutique, please visit the website at:
http://www.leonaedmiston.com

Leona launched her solo label with business partner Jeremy Ducker in 2001 and they formed the present company of Ducker Edmiston Pty Ltd. The label, entitled ‘Leona Edmiston,’ is a tribute to the dress in all its incarnations. A Leona Edmiston Frock is elegant, versatile and ageless.