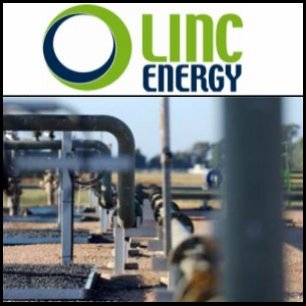 PINK:LNCGY) confirm that it is business as usual for the Company's Chinchilla Underground Coal Gasification (UCG) to Gas to Liquids (GTL) demonstration facility in south west Queensland.

This follows the announcement last Friday by Queensland Minister for Climate Change and Sustainability, The Honourable Kate Jones, to end Cougar Energy's (

ASX:CXY) Kingaroy UCG trial on the basis that Cougar Energy could not demonstrate to the Department of Environment and Resource Management and the Independent Scientific Panel that it could recommence its operations without an unacceptable risk of causing environmental harm.

The Company is pleased to note that the same Independent Scientific Panel in its report on Linc Energy acknowledged Linc Energy's database containing a considerable quantity of information, its significant technical capacity, the fact that the Chinchilla demonstration facility is regarded as world's leading practice and its willingness and openness in discussing its operations.

Mr Peter Bond, Chief Executive Officer, said, "Linc Energy's superior technological capacity together with its dedication and commitment to professional environmental management has resulted in this pleasing outcome as we approach commercialisation of this valuable technology."

"This is an endorsement of our operations and of our unwavering commitment to environmental management and the wellbeing of the community around which we operate."

Mr Bond confirmed that Linc Energy is not currently subject to any environmental evaluation notices and that all reports provided to the Queensland Government have been accepted.