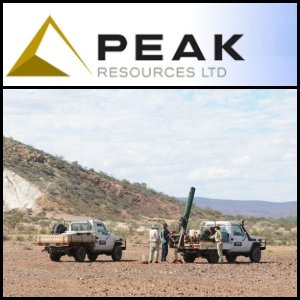 Highlights from the program include the following intersections:

PINK:LYSCF)) in Western Australia; being REO, phosphate and tantalum - niobium enrichment in a deeply developed regolith profile above a large carbonatite.

All 13 holes intersected +1% rare earth oxide (REO) mineralisation in the central hills area of the Ngualla carbonatite. Most of the holes also intersected significant widths of higher grade including:

Results received to date are from two 250m spaced east - west RC drill traverses. Mineralisation extends over 600m in an east west direction and up to 80m depth, and is currently open to the north, south and west. Only a portion of the higher tenor surface geochemical REO anomaly that is centred on Mt Ngualla has been drill tested to date.

Preparation is underway for further drilling at Ngualla, which will commence after the rainy season ends in late April. The priority focus of future drilling will be to test both the bedrock and alluvial REO zones of mineralisation with the objective of providing sufficient data for an initial JORC compliant resource estimate as rapidly as possible.

For the complete Peak Resources Limited announcement including tables and figures, please refer to the following link:

Listed on the Australian Stock Exchange (ASX:PEK) in November 2006 and based in Perth, Western Australia, Peak Resources Limited is developing the Ngualla Rare Earths Project in southern Tanzania. Peak also holds a number of gold projects comprising a mix of brownfield, greenfield and advanced exploration prospects in the highly prospective Lake Victoria Goldfields area of Tanzania.

Peak’s goal is to generate shareholder value through:

- Discovery of new gold deposits within its large, highly prospective portfolio of exploration projects in Tanzania

Peak’s head office is located in Perth, Western Australia with an exploration office in Mwanza, Tanzania.