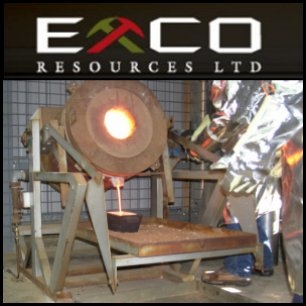 Under the management of Exco's joint venture (JV) partner Polymetals Group Pty Ltd (Polymetals), the project has continued to perform extremely well in early 2011. The first two months of production in 2011 have yielded 19,378 ounces of gold. Current production levels equate to an annualised rate of more than 100,000 ounces (100% above the Life of Operation target rate of 50,000 ounces per annum).

Importantly, both mining rates and operating costs are in line with expectations. Operating costs remain well below A$500/oz and with prevailing gold prices remaining no less than A$1,400/oz, the JV partners are currently enjoying very healthy margins.

Through a mixture of spot and forward sales, Exco has achieved an average sale price of A$1,361/oz (approximately 30% above budget) since the beginning of 2011. Net cash flows of A$12 million were generated during January and February resulting in corporate cash funds at the end of February being in excess of A$25 million.

Resource modelling incorporating geological interpretation, wireframing and geostatistical analysis of the White Dam Gold Deposit has led to the completion of an updated resource estimate containing:

The resource estimate was completed using Ordinary Kriging within two geologically and geochemically defined horizons which extend for over 560m east-west and 300m north-south. The final campaign of grade control shows that the mineralisation is still open at depth and further metallurgical testwork is underway to determine the properties of this material and it's suitability for heap leach processing. Further work has also been completed on specific gravities to determine a more accurate estimate of the density.

The resource has been reported against a 0.4g/t Au cut-off to enable comparisons to be made against the previous resource results, and also a 0.3g/t Au cut-off to reflect the current mining cut-off and depleted using the September 2010 end of month surface.

The JV partners have commenced a further A$500,000 programme of near mine exploration with a view to extending the life of the project. Initial results are expected shortly and will be released as they are available.

For the complete Exco Resources announcemeng including figures and tables, please refer to the following link:
http://www.abnnewswire.net/media/en/docs/533005.pdf