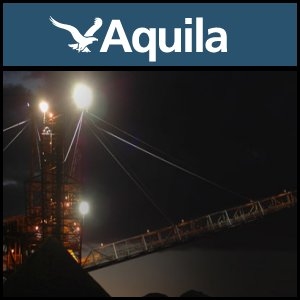 ASX:AQA) announced that the Avontuur Manganese Project in South Africa has been expanded to target a 2Mtpa operation, following an increase in the Resource Statement of 63% to 108.9Mt at 38.6% Mn in February 2011. The Feasibility Study of the Project has commenced and is due for completion in the September Quarter 2011. The Company holds a 74% interest in the Project and construction of the mine is scheduled to commence in early 2012 with commissioning in March Quarter 2013.

ASX:DRA) announced further promising drill results from the Jokisivu Gold Mine in southern Finland. The Company has identified new gold zones, reporting a series of intercepts including 7.70m at 4.09 g/t gold, 5.25m at 8.61 g/t gold and 8.90m at 4.52 g/t gold. The results provide evidence that the potential of the Jokisivu area is yet to be fully realised. The Jokisivu Gold Mine currently hosts a Measured, Indicated and Inferred Resource totalling 338,500 ounces.

ASX:CCC) said that export thermal coal sales from the Company's Ferreira and Delta Operations in South Africa increased by over 52% to 48,532 tonnes in February 2011 from 31,875 tonnes in November 2010. The average realised net export thermal coal price received for sales during the months of January and February has been US$118/tonne. The Company is on schedule to meet targeted export sales of 48,000 tonnes for the month of March 2011 and targeted sales of 141,000 tonnes for the March quarter 2011.

ASX:DML) reported additional results from infill drilling of the Zeta underground resource, part of the 100% owned Boseto Copper Project in Botswana. High grade intercepts were reported including 10.2m at 2.0 % Cu and 43.8 g/t Ag and 9.0m at 2.0 % Cu and 46.2 g/t Ag. An updated resource estimate for Zeta is to be completed in Q2, 2011. The Boseto Copper Project is expected to commence production in the first half of 2012 with planned production rates of 36,000 tonnes of copper and 1 million ounces of silver per annum over a minimum 15 year mine life.