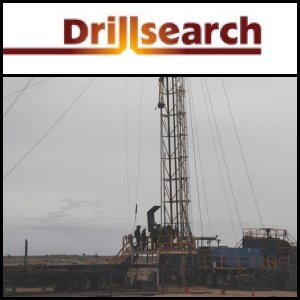 PINK:DRLLF) as part of the PEL 106B Joint Venture (Drillsearch (50%) and Beach Energy Limited (

PINK:BEPTF) 50% and Operator) is pleased to announce that the Extended Production Testing (EPT) of the Canunda-1 worked over and reconfigured Condensate Discovery recommenced over the weekend and has already delivered promising production results. The well is producing 3 MMscfd gas with a gas oil ratio of 180 Bbls/MMscfd on a 22/64" choke.

Initial extended production testing began in mid-2010 and due to high condensate production rates the 10-day test was choked back due to storage and transportation constraints. Over the 10-day testing period of the upper zone, the Canunda well produced over 2500 bbls of 62 degree API condensate.

The new production completion is designed to accommodate the very high liquid content gas. This extended production test is designed to better determine the overall extent and potential reserves in the Canunda Liquids Discovery and to determine an overall development plan for the field.

As part of the PEL 106B pending development Gaffney Cline and Associates (GCA) is currently undertaking a review of the Canunda, Udacha, Brownlow and Middleton Discoveries for reclassification to Reserves status as justified for development.

For the complete Drillsearch announcement including maps and tables, please view the following link:
http://www.abnnewswire.net/media/en/docs/630274.pdf