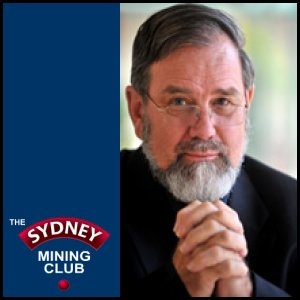 Professor Bob Carter Speaks At The Sydney Mining Club: The Need For Intelligent Policy Response
Sydney, April 7, 2011 AEST (ABN Newswire) - In preparing for today's address by Prof Bob Carter, himself open minded about the potential of man-induced climate change, I found myself asking this question. What is the difference between a climate change skeptic and a carbon tax skeptic?

The introduction of a carbon tax by the Gillard Government cannot possibly directly have any measurable influence on global climate. So why do it? Clearly, the idea must be to set an example as an early adopter of a carbon so that Australia may inspire the world to follow. But how strong can this example be where Australia is on the other hand a major supplier of carbon energy to the world?

Further if our moral example is at best watery, why damage our economy by taxing carbon early, instead of at least buying time for intelligent conversation such as we are about to have today? Australia exported over A$36 billion in coal (read carbon) to the world in 2009/2010, that is we shipped 292 million tonnes of thermal and metallurgical coal.

In a big picture you might say supplying minerals - and particularly mineral sourced energy in the form of coal, natural gas, and uranium - is what Australia 'does for a living'. Over 54% of our annual energy bounty is coal of which we hold 10.6% of the global reserve. In uranium we hold a whacking 47% of the world reserve.

We mine uranium, exporting about 40% of the equivalent energy content of our coal output in that mineral, but we ban its use domestically. What lesson can the world take from the similarly cock-eyed position on the uranium example? Yes you should buy it, yes exporting energy is what Australia 'does for a living', but no you shouldn't use it? With such chasms in the logic, surely the world can't be taking any energy policy stance Australia has very seriously. So we should stop trying to lead with our very small moral chin until Australia gets a credible national energy policy of its own. With the prospect of a carbon tax on offer, we are offering the same ethical proposition to the world as we have with uranium - a confused one.

The irony, and worse, the hypocrisy of our existing policy position is not lost on Australians and explains why so many Australians, the guy in the pub, are smelling a rat with the proposed carbon tax. Energy exports, along with coal consuming exports of other minerals, notably the 400 million tonnes a year of iron we ship, are the basis for our national wealth and resilience to such shocks as the GFC.

They are the reason we can afford health care, education, national highway programs and school halls. We are promoting against our economic well-being. It is easy to see why carbon tax skeptics are rapidly out-numbering climate change skeptics. They fear that the A$832 a year their family will be asked to spend towards a carbon tax every year simply will neither change the climate at their house, nor inspire the world with example.

A more widely policy solution surely exists and we are grateful to Professor Bob Carter for coming to Sydney today and offering us trail blazing thought on: Living with Carbon.

All mineral figures from Australian Government: Energy in Australia 2011 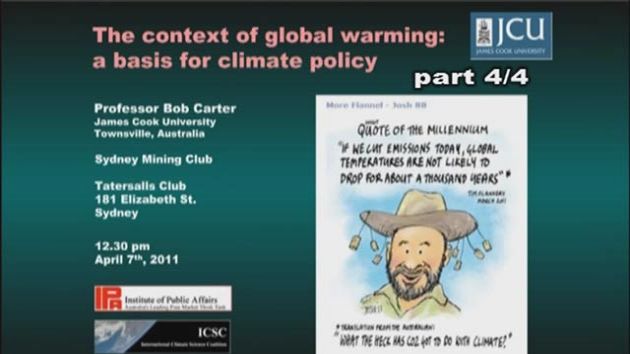