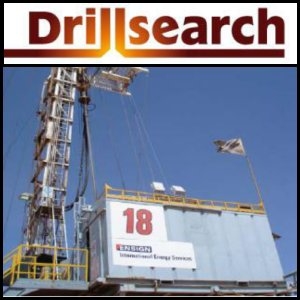 PINK:DRLLF) is pleased to announce the commencement of a five well drilling campaign in the third week of April with the spudding of Hanson-1, located in PEL 91 in the Cooper Basin Western Flank Oil Fairway in South Australia. The Ensign #18 drilling rig is now on location at the Hanson-1 drilling site and is currently rigging up and completing pre-drilling safety inspections and some minor repairs. Drilling on Hanson-1 and the other wells is expected to take 10-14 days each. Drillsearch will make announcements at the spudding and completion of each well and with the encountering of any significant results. Interests in PEL 91 are Drillsearch (60%) and Beach Energy Limited (

The Bauer, Hanson and Snellings Prospects are all located within 1-2km of the producing Chiton Oil Field and all primarily target the Namur Sandstone (proven at the Chiton Oil Field). The Namur Sandstone is a highly productive oil reservoir in the Western Flank Oil Fairway as seen in the recent Parsons, Callawonga, Perlubie, Butler and Chiton Oil Discoveries. On initial production test, the Chiton-1 oil well flowed at 2,434 barrels of oil per day.

The Arno Prospect targets both the Namur Sandstone oil play proven at the Chiton Oil Field and the Birkhead stratigraphic play. The Birkhead channel stratigraphic play has been proven at the Wirraway, Growler, Charo and Snatcher Oil Discoveries 30-50km north east of the Arno Prospect. The Marino-1 well approximately 2km north of Arno encountered oil in intra-Birkhead sands in August 2009 and on a 3-hour drill stem test recovered 3.5 barrels of 48.2 degree API oil from a tight reservoir package. The PEL 91 Joint Venture elected to plug and abandon the Marino-1 well due to the poor quality of the reservoir at that location.

A discovery in any of these prospects would add significantly to Drillsearch's Reserves and overall production. All of these prospects are in close proximity to the Chiton Oil Field and because of their close proximity to the existing Chiton infrastructure, any discovery could be commercialised quickly and provide immediate cash flow to the Company.

To facilitate the drilling program, Beach has constructed a new access road on higher ground from the Callawonga Oil Field into the Chiton Oil Field along with the Kudnarri Bridge crossing the Cooper Creek. A forward supply camp built on the western side of the Cooper Creek at Gunyah will also support drilling and production operations in times of flooding and heavy rains.

For the complete Drillsearch announcement including maps and tables, please refer to the following link:
http://www.abnnewswire.net/media/en/docs/631037.pdf