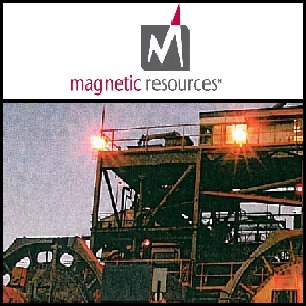 ASX:MAU) has completed the second stage of the latest reverse circulation (RC) drilling programme. The drilling programme was aimed at testing of strike extensions of the prospective coarse-grained magnetite banded iron formation (BIF) and providing information for a preliminary resource estimate.

Preliminary geological interpretation indicates that the magnetite BIF is both faulted and folded, with further interpretation of the structure and continuity of the BIF in progress. In addition, Davis Tube recovery (DTR) tests are being carried out on 297 composite samples from this drilling program as part of the metallurgical testwork. As previously reported, DTR tests on drill samples have indicated that Jubuk magnetite can probably be upgraded to a premium grade product using a coarse grind and magnetic separation.

Given the encouragement to date in extending the strike length of the mineralisation, the company has completed an orientation gravity survey to examine methods by which it can further improve its drill targeting. The gravity survey has clearly defined the Jubuk BIF and has demonstrated the value of the gravity method in assisting the interpretation of the geometry of the iron formation. As a result the entire 7km strike length around the Jubuk dome will be surveyed by gravity, together with six separate targets totalling a further 16km of strike in the vicinity of Jubuk. It is anticipated that further drilling will be carried out as a result of these surveys. In addition, further gravity surveys are planned at Mt Vernon and Rock Dam to assist in the identification of drilling targets in these areas.

A 147-hole, 2528m air-core drilling program was completed in March 2011 in the Wubin project area testing for near surface hematite-goethite enrichments. Full analytical results are yet to be received and will be reported when available.

A 60-hole aircore drilling program will commence in the next month to test the source of magnetic anomalies identified from Magnetic's aeromagnetic surveys and situated some 65km SSE of Jubuk.

The target areas, shown in the map below, comprise soil covered agricultural land where samples of iron-enriched lateritic detritus have returned values up to 50.3%Fe. The drilling is targeted to identify areas of possible iron enrichment or magnetite mineralisation.

For the complete Magnetic Resources announcement including maps and tables, please refer to the following link:
http://www.abnnewswire.net/media/en/docs/538431.pdf