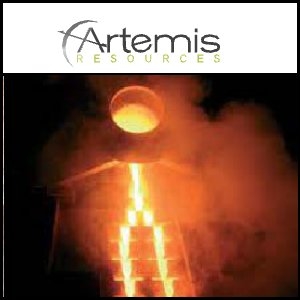 ASX:ARV) is pleased to announce that first pass drilling at its Yandal gold project in the gold rich Yandal- Bronzewing greenstone belt in Western Australia, has intersected a promising high-grade gold zone at the Forked Stick prospect and found exciting southern extensions of the historic Lowlands resource. The results follow a 14 day drilling program which Artemis undertook at Yandal in March during which it completed sixteen holes for 2330m over 4 existing gold prospects.

The new mineralisation is open at depth and along strike. Follow up drilling is already planned to commence in late May to further investigate the Forked Stick gold intersections.

At Lowlands mineralisation has been intersected ~60m south east of the previous JORC gold envelope. And in addition a deep vertical hole at Lowlands also discovered mineralisation well below the existing resource at a depth of 225m. Hole ARYARC003 was designed to test for stacked gold lenses below Lowlands and returned 5.0m at 1.6g/t from 225m including 2.0m @ 3.63g/t. This result indicates potential for another gold zone below the historic Lowlands resource. Follow up drilling is also planned to investigate these results in late May.

The Artemis 100%-owned Yandal Gold Project has potential to deliver million oz gold resources. The project is situated within the highly productive Yandal gold belt in Western Australia, which has produced more than 12 million ounces of gold. The Yandal Project tenements cover approximately 220km2 and lie 90km south of the Jundee-Nimary Gold Mine (7 million ounces) and 30km north of the Bronzewing Gold Mine (4 million ounces). The Yandal project tenements cover over 25km of greenstone which is host to historic gold resources at Lowlands and Slav Well.

Of the 16 holes drilled during March, 8 holes were targeted around the existing Lowlands resource to test for possible extensions to the south east and west, while 4 holes were targeted to the north to test for repetitions (Lowlands North). Additionally, one deep vertical hole was drilled to test also for repetitions at depth. Two holes were also drilled at Forked Stick and one under the Dan's Find West prospect. 13 of the 16 holes drilled at Yandal intersected gold above 0.5 g/t Au.

Phase two drilling is already being planned to commence during the June quarter to further investigate a Lowlands extension and expand the exciting high grade Forked Stick intersection. The new drilling will also target Slav Well resource extensions and test historical results at International and 6 Mile Well. The drill program is planned to include 2500m of RC drilling in addition to surface mapping and rock chip sampling.

The development of the Yandal project at a time of record gold prices (over US$1500 per oz) is designed to confirm high grade mineralisation and test for major extensions to this mineralisation.

Computer-aided modeling of the mineralisation and geology at the Lowlands Gold Deposit within the Yandal Project has highlighted a well-defined and well-drilled deposit hosted by a tightly-folded sequence of mafic rocks which are strongly sheared and moderately veined. The fold has been mineralised with gold which follows the layers and forms bedding-controlled gold lodes.

Gold intercepts from historical drilling at Lowlands include:

For the complete Artemis Resources Limited announcement including figures and tables, please refer to the following link:
http://www.abnnewswire.net/media/en/docs/540488.pdf

Artemis Resources Limited (ASX:ARV) (FRA:ATY) is a resources exploration and development company with a focus on its prospective West Pilbara (gold, base metals, platinum and platinum group elements) and Mt Clement-Paulsens (gold) project in Western Australia. On 16 December 2016, Artemis announced the signing of a binding conditional agreement with Fox Resources Limited for a 3 month exclusive option to buy their fully permitted AGIP 425,000tpa Radio Hill nickel and copper operations, processing plant and associated mining and exploration tenements with significant existing JORC 2004 and 2012 compliant resources of Nickel, Copper and Zinc situated within a 15 km radius of the Radio Hill plant, for a total consideration of $3.5 million. The Radio Hill Plant is located 35 km south of Karratha in the Pilbara Region of Western Australia. 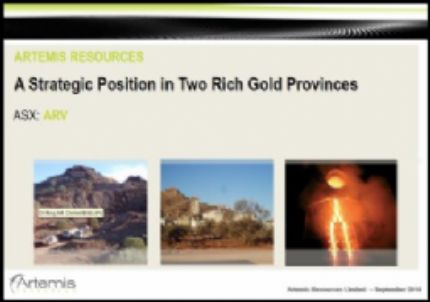