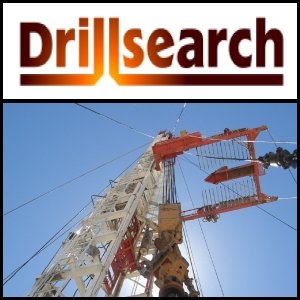 PINK:DRLLF) is pleased to announce that the Brownlow, Canunda, Middleton and Udacha Wet Gas discoveries in PEL 106B are commercial and justified for development, following a review by the Company's independent expert, Gaffney, Cline & Associates, Ltd (GCA).

GCA has independently confirmed that plans for the commercial development of the Brownlow, Canunda, Middleton and Udacha Wet Gas discoveries have progressed to the point that allows Drillsearch to upgrade the Contingent Resources to Reserves. The Company can now book the condensate, LPG and gas in each of these discoveries as commercial Reserves.

As part of the latest review, GCA also evaluated initial results from the Canunda Extended Production Test (EPT) and concluded that the recovery of gas liquids will be substantially higher than previously estimated.

GCA has estimated these Wet Gas discoveries contain Gross 2P Reserves of 13.92MMboe. Drillsearch's share of these discoveries is approximately 7.62MMboe, of which 3.11MMboe are liquid hydrocarbons (condensate and LPG).

Drillsearch Managing Director Brad Lingo said "We are extremely pleased with the confirmation in the upgrade in our 2P Reserves based on these very significant discoveries in the Wet Gas Fairway. More importantly, we are focused on the future commercial development of these discoveries and their near term production potential."

The table overleaf sets out the Company's Reserves and Resources position as at 4 May 2011.

GCA's current review of Canunda reserves and resources incorporates initial results from the Canunda EPT. This data has confirmed that the main reservoir is very gas liquids rich. The full suite of test data from the EPT, including results of the extended pressure build-up test, are expected to be available by end June. At that time Drillsearch will reassess the in place and recoverable gas volumes.

Drillsearch Managing Director Brad Lingo said "We are extremely encouraged by the recent results from the Canunda EPT. The value in the Canunda EPT combined with the other Western Cooper Wet Gas discoveries comes from the high condensate and LPG content.

"This is certainly the case with the Canunda Wet Gas discovery which has already produced over 15,000bbls of condensate over 423 hours of production and we haven't even been able to open the well up to its full bore potential yet."

The upgrade of the Brownlow, Canunda, Middleton and Udacha Wet Gas discoveries from Contingent Resources to Commercial Reserves has been confirmed by GCA based on a review of an interim field development plan covering all four fields and the approval of this development plan by the Drillsearch Board of Directors based on draft commercial arrangements.

Drillsearch Managing Director Brad Lingo said "The initial development of these fields is seen as a pilot project and the beginning of a much larger regional multi-field development. This multi-field project will cover both PEL 106B, which we are in 50/50 Joint Venture with Beach Energy and also PEL 106A which Drillsearch holds on a 100% basis.

"Given we have drilled 12 exploration wells and made 10 Wet Gas discoveries, this area requires a more intensive exploration drilling focus. The GCA evaluation and the proposed development of a Wet Gas Pilot Project clearly demonstrate that this part of the Cooper-Eromanga Basin is not only commercial but an attractive proposition.

"We are actively looking to undertake significant additional appraisal and development drilling over the next year to further prove up these resources."

PINK:BEPTF), hold a common view that the Western Cooper Gas and Liquids discoveries can be commercially developed. The Joint Venture implementation planning for the development of PEL 106 B Wet Gas discoveries is continuing.

For the complete Drillsearch Energy Limited announcement including figures and table, please refer to the following link:
http://www.abnnewswire.net/media/en/docs/633436.pdf

Link: Reserves and Recources Upgrade for PEL 106B