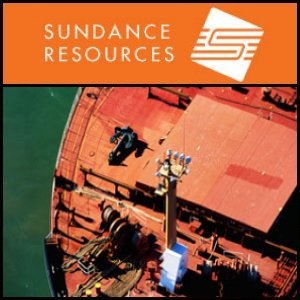 PINK:LGDMF) have signed a Letter of Intent (LOI) for Access Co-operation with regards to usage of rail and port infrastructure as part of the Mbalam Iron Ore Project located in Cameroon and Congo in central West Africa.

The LOI outlines that the two Australian-based companies with iron ore assets in Cameroon will together examine opportunities for how Sundance's proposed infrastructure may offer rail and port haulage to Legend's Ngovoyang Project.

Both Sundance's Mbalam Project and Legend's Ngovoyang project are located in the southern region of the Republic of Cameroon. The proposed rail route being developed by Sundance passes in close proximity to the southern boundary of the Ngovoyang Project.

Giulio Casello, CEO and MD of Sundance said that as a first-mover in this emerging world-class iron ore region, the Company viewed it as very important to work in a spirit of cooperation with neighbouring resources companies for the mutual benefit of all stakeholders including the Government and people of Cameroon.

"We believe it makes a lot of sense for our two Australian-listed companies that operate near each other in West Africa to demonstrate our mutual belief and to endorse cooperation in order to bring to fruition the development of a new world-class iron ore region. We think the long term potential of this region could reach up to 100 million tonnes per year - or more - but for this to be achieved, the fundamental requirement will be the access to dedicated, heavy haulage infrastructure for the export of iron ore."

Mark Wilson, Managing Director of Legend Mining said, "Signing this agreement enables Legend to focus on our exploration activities with confidence in knowing there is a LOI providing a transport option for our ore to port."

The LOI for Access Co-operation is a non binding agreement however it does mark another step in Sundance's progression of its plans for the development of the Mbalam Project following the completion of the Definitive Feasibility Study in March 2011. Construction of the 510km railway from Mbarga to the Cameroon coast is scheduled to commence later this year, pending Government approvals and securing of project finance.