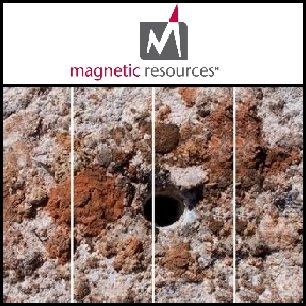 ASX:MAU) is conducting a detailed gravity survey over its Jubuk magnetite project.

The gravity survey is expected to provide greater definition of target zones and to allow prioritisation of target areas for drilling. Preliminary gravity results show numerous strong responses and indicate that the magnetite zone could extend about 600m south of the drilled area, where the magnetic data indicates a narrowing and weakening response.

Drilling in mid 2010 of a second prospective parallel zone (termed Marriotts) to the south of Jubuk did not intersect significant grades however it is anticipated that the gravity data will allow more effective positioning of drill holes to test this large target zone.

The gravity survey is being extended to the south along both prospective horizons and will be subject to intensive processing and interpretation in conjunction with the airborne and ground magnetic data previously collected by Magnetic Resources.

For the complete Magnetic Resources announcement including figures, please refer to the following link:
http://www.abnnewswire.net/media/en/docs/542989.pdf