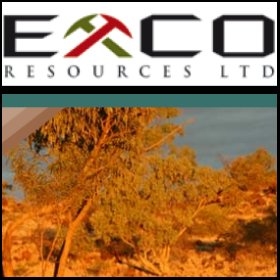 PINK:EXRSF) ('the Company") notes speculation in the press this morning regarding inter alia '..Ivanhoe making a takeover offer...' (for the Company).

The Company wishes to clarify that it is not in discussions with Ivanhoe with a view to Ivanhoe making a bid for the Company and is unaware of any basis for such speculation. Furthermore the Company notes that Ivanhoe have informed the market that " ...it is not considering a takeover offer for Exco". The Company will continue to keep Shareholders and the market informed of any developments. In the meantime it is focused on the process for the completion of the sale of the CCP.

The Company recently completed a successful round of presentation and networking events in the major Australian capital cities, meeting with a wide range of Shareholders. Feedback has been very positive, and proxies received to date also reflect an overwhelming vote in favour of the resolution to approve the sale of the CCP.

One issue that has been raised by a number of major Shareholders is the level of intended distributions, and whether the Company might consider increasing the amount above A$100 million. The Exco Board understands the various views on the matter, and has not ruled out a greater return to Shareholders. Indeed, as part of formulating its future strategy, the Board expects to continue a process of constructive consultation with the Company's major Shareholders, post the upcoming General Meeting on 9th June 2011.

Assuming the proposed transaction is approved, the Board will review its capital management options in the context of the Company's post-deal cash position. Issues that will be considered in determining the final amount and timing of the planned distribution(s) include:

- Taxation outcomes (including the amount that may be paid as a tax free capital return), and

- An assessment of the Company's exploration and business development opportunities, and capital requirements generally.

As noted in the Explanatory Memorandum accompanying the Notice of Meeting issued on the 6th May 2011, the Board intends to structure the timing and the form of the distribution(s) in such a way as to seek to maximise the value of the return(s) to Shareholders (with necessary regard to the above issues).

The cash retained by the Company will continue to provide for the purposeful growth of its remaining asset base.

The eligible members of the Board would like to re-iterate their unanimous belief that the proposed sale of the CCP is in the best interests of all Shareholders and re-affirms their recommendation that Shareholders approve the resolution as laid out in the Notice of Meeting.

Link: Clarification and Update on Sale of the CCP