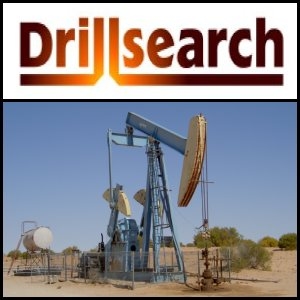 PINK:DRLLF) is pleased to announce that following the success of the Hanson-1 New Oil Field Discovery in PEL 91, Drillsearch's Western Flank Oil Fairway drilling program continues with the spudding of Snellings-1, the second well in the five well program. The Snellings-1 well spudded at 7.00am Monday, 6 June 2011. Drillsearch holds a 60% Interest in PEL 91 while Beach Energy Limited (

PINK:BEPTF) as operator holds 40%. The Hanson Oil discovery is estimated to contain gross recoverable oil of up to 1 million barrels. Drillsearch also holds a 60% interest in this discovery.

Snellings-1 oil exploration well is located 1500 meters north of the Hanson Oil Discovery and 1900 meters south of the Chiton Oil Field. The primary objective of the well is the Namur Sandstone which is the productive oil reservoir in both the Chiton Oil Discovery and the Hanson New Oil Field Discovery announced on 30 May 2011 along with numerous oil discoveries in the adjacent PEL 92 permit to the south of the Snellings prospect. The Birkhead Formation Sandstones, Hutton Sandstone and Poolowanna Sandstones are considered secondary targets for oil and have been proven at the Christies and Sellicks oilfields to the south and south east of Snellings-1. Drilling will be to a total depth of 1935mRT and it is expected that the drilling will take 10-14 days.

Seismic mapping of the Namur horizon indicates that the Snellings Structure has approximately 10 metres of independent structural relief and potentially encloses an area of 1.0km2. The Snellings Prospect is estimated to have up to P10 High-side Recoverable Prospective Resource potential of up to 1.0 million barrels of oil.

Details of the Snellings Prospect are set out in the attached Prospect Data Sheet and accompanying maps and seismic sections.

Snellings-1 will be drilled as a conventional vertical well with wireline logging and possible testing planned after the well reaches total depth. The main target zone is expected to be penetrated five to seven days after spud.

Mr Brad Lingo, Managing Director noted that "Following the success of the Hanson-1 Oil Discovery announced on 30 May 2011, the spudding of Snellings-1, the second well in our five well drilling program is very encouraging. We are progressing on schedule, and we look forward to providing you with further updates on the exploration work we are undertaking in the highly prospective Western Flank Oil Fairway."

For the complete Drillsearch announcement including maps and tables, please refer to the following link:
http://www.abnnewswire.net/media/en/docs/636883.pdf