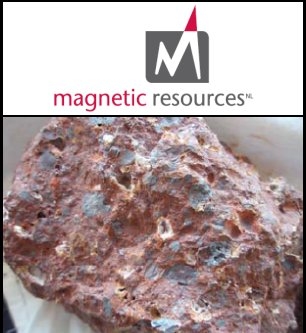 ASX:MAU) is very encouraged by the quality of new Davis Tube test results from Mt Vernon, specifically the low SiO2, Al2O3 and P contents. The testwork of fresh rock samples from drillhole MVRC12 have generated concentrates averaging 67.5%Fe, 1.6%SiO2, 0.77%Al2O3 and 0.02%P. The gangue content, with the majority of sulphides, was removed from the primary feed by the Davis Tube.

The drilling intersected substantial widths of low grade coarse-grained magnetitebearing gneiss, including 132m @ 13.3%Fe (MVRC11) from 18m to end of hole at 150m, indicating the mineralized zone is open at depth. The company is currently completing a detailed gravity survey which will be used in conjunction with ground magnetic data to model the magnetite bearing gneisses prior to drilling. The combined datasets should highlight areas of greater magnetite contents and investigate the potential of a large bulk tonnage project.

Ten magnetic targets were identified from regional aero-magnetics of the Mt Vernon prospect and modeled based on the ground magnetic survey completed over the area at Vernon. An RC drilling programme testing six magnetic targets was completed in February. This drilling tested the shallower targets received A$100,000 of funding from the WA Government's Exploration Incentive Scheme. Significant results are summarised in Table 1 (see link at the bottom of the release).

Nineteen samples were submitted for Davis Tube testwork (DTR) to determine the extractable magnetite contents. These included nine samples from the weathered portion of the intersection of Hole MVRC11 (15-42m), and from fresh rock, 117-150m from hole MVRC12.

The samples were pulverised to minus 75 microns and the results of the DTR testwork are shown in Table 2 (see link at the bottom of the release). The fresh rock samples, from MVRC12, recovered approximately 46% of the contained iron creating a concentrate averaging 67.5% Fe with low SiO2 and Al2O3 assays of 1.6% and 0.77% respectively.

Significantly the high P content in the primary feed (average 0.88%P) was removed from the concentrate by the separation process. The sulphide content was enriched in the concentrate and will be further assessed in testwork programmes.

The Fe content in the weathered profile of MVRC11 is slightly enriched and the magnetite is entirely oxidised to hematite or goethite with no recoverable magnetic portion.

A ground gravity survey is currently in progress over the area to define areas of greater density and hence magnetite content. This data will then be integrated with more detailed ground magnetic data to be collected in coming weeks. A detailed interpretation of both sets of data will be completed to identify drilling targets.

For the complete Magnetic Resources announcement including figures and tables, please refer to the following link:
http://www.abnnewswire.net/media/en/docs/546378.pdf