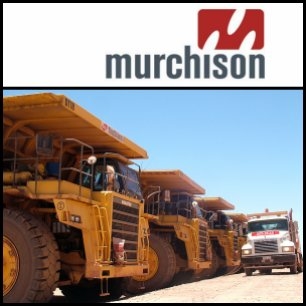 PINK:MUMTF) wishes to announce a number of changes to the Board and leadership team which have taken place:

- Paul Kopejtka has stepped down from the role of Executive Chairman and will remain a Non-Executive Director of the Company;

- Ken Scott-Mackenzie has been elected by the Board as the Company's new Independent Non-Executive Chairman;

- Greg Martin, currently a Non-Executive Director of the Company, has been appointed Murchison's Managing Director; and

The changes reflect Murchison's move into a critical period in its evolution, following receipt of the feasibility studies for Oakajee Port & Rail ("OPR") and Jack Hills Expansion Project ("JHEP") and the continuation of the Board's review of strategic options.

The changes also complete the process of Board expansion and renewal first announced at the Company's 2010 AGM. Mr Scott-Mackenzie said Murchison was now moving into a new phase and the changes to the senior board positions reflected the challenges ahead for the Company.

"On behalf of all shareholders, the Board thanks Paul for his work in developing Murchison's vision for the mid-west region to a critical milestone. Receipt of the feasibility studies is a natural juncture for Paul to transition from his role of Executive Chairman," said Mr Scott-Mackenzie.

Mr Kopejtka said he was delighted the project feasibility studies have now been received and looked forward to seeing the Board steer the Company through the next challenging phase as it seeks to generate substantial shareholder value.

"This is a natural point to hand over the reins to a new Chairman and Murchison shareholders are fortunate to have a person of the quality and standing of Ken to move into the role," said Mr Kopejtka.

"As one of Murchison's largest shareholders with an interest of more than 5%, I remain a committed supporter of the Company and look forward to the delivery of value for our other loyal shareholders.

"Murchison is playing a pivotal role in the development of the mid-west mining province and I'm very proud of the role and contribution played by the Company."

ASX:ABC). He brings a wealth of experience derived from his executive career spanning 36 years in the engineering, mining and construction sectors. Before retiring from his executive roles in 2009, Mr Scott-Mackenzie spent four years as CEO of Bilfinger Berger Australia, the holding company for Abigroup, Baulderstone and Bilfinger Berger Services. Prior to this, he held a number of positions at Abigroup, including CEO.

"Murchison has embarked upon two very ambitious projects, with great vision and commitment. It is now incumbent on the new Board to deliver value for its shareholders, while acknowledging the considerable challenges that lie ahead," said Mr Scott-Mackenzie.

Mr Martin has 30 years experience in the energy, utility and infrastructure sectors. He is a Non-Executive Director of major Australian oil and gas producer Santos Limited (

ASX:ENE) as well as the Australian Energy Market Operator.

"In my new executive role at Murchison, I will be focused on working with Mitsubishi and our other key stakeholders, whilst overseeing the Strategic Review process designed to crystallise value for Murchison's shareholders," he said.


Link: Board and Management Changes