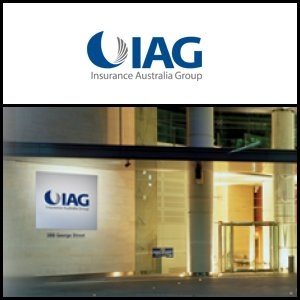 ASX:IAG) has agreed to acquire a 20% strategic interest in a general insurer in China, Bohai Property Insurance Pty Ltd, for a price of approximately A$100 million. Bohai Insurance is predominantly a motor insurer, selling directly to customers through around 265 provincial and city-based branches and a network of agents in China. The acquisition was an important step in IAG's strategy to enter China's general insurance market. Once the partnership is complete, IAG will have an Asian foothold in China, India, Malaysia and Thailand. IAG expects its Asia division to contribute 10% of the group's gross written premium by 2016.

ASX:ERL) reported high grade copper intersections of up to 19 metres at 1.85% from the A Zone prospect within the Company's wholly owned Yuinmery copper-gold project in Western Australia. The A Zone prospect lies 1.3 km north of Empire's flagship Just Desserts prospect where the Company has defined a JORC Indicated and Inferred resource of 1,070,000 tonnes at 1.82% copper and 0.78g/t gold. Drilling is continuing at A Zone to test a number of other promising targets in the area.

ASX:IAU) reported further encouraging gold and copper assay results from the on-going drilling program at the copper-gold zone of the Tujuh Bukit Project in Indonesia. Results included 96 meters at 0.90 g/t gold and 1.15% copper, delivering grades significantly greater than the project's resource grade. The company will commence follow-up work to further test the intercepts.