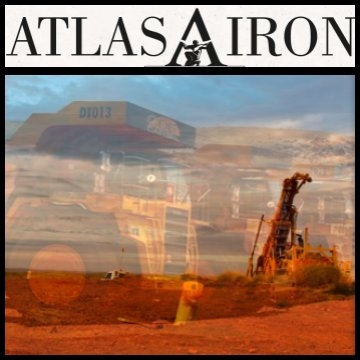 ASX:AGO) is pleased to report a maiden annual profit after income tax of A$169 million for the year to June 2011.

The outstanding result has led Atlas to declare an unfranked 3 cents per share maiden dividend as part of the commencement of a 'progressive' dividend policy.

During the year, Atlas recorded net operating cashflows of A$221 million and closed the year with a cash balance of A$366 million. The Company remains debt-free.

The record profit reflects a 383 percent increase in the Pilbara iron ore miner's exports to 4.6 million tonnes in the 12 months. In the 2012 financial year, the Company will benefit from this increased production rate for the full 12 months targeting exports of 6 million tonnes.

Atlas is well advanced in its plans to increase annualised production to 12Mtpa in December 2012 through expansion at the Wodgina mine site and development of its Abydos, Mt Dove and Mt Webber projects in the Pilbara. Key contract negotiations are underway and extensive planning is in place for a private haul road that will connect production hubs at Wodgina, Abydos and Mt Webber to Utah Point.

This preparation is being done in parallel with studies to lift production to 22Mtpa by 2015 based on an expansion of the Mt Webber/Daltons DSO project in combination with the development of a substantial new mine at McPhee Creek.

As part of this major production shift, Atlas is considering several rail options. As stated previously, these include joint ventures, access arrangements with neighbours, construction of its own railway and the involvement of a third-party infrastructure provider.

Rail access would also significantly increase the economic prospects of Atlas' iron ore assets in the south-east of the Pilbara, heralding yet another era in Atlas' growth.

Development of these assets would enable Atlas to capitalise on its strategic port capacity of up to 34.5 million tonnes a year, pre any capacity acquired via the takeover bid for Ferraus.

The Ferraus Shareholder meeting to consider the asset sale and placement is scheduled for 29 August 2011 with the takeover bid to open in the week commencing 5 September 2011.

"This record result highlights the strength of the Company's achievements in what has been a relatively short time," Mr Flanagan said. "The rapid transition from a small ASX listing in 2004 to our position as one of Australia's Top 100 public companies is a tribute to the Company's staff, contractors and shareholders."

"Despite this success, the Atlas story is just beginning. We now have the foundations on which to build a significant mining company of which all Australians can be proud."

"This will involve further substantial expansions in the Pilbara, ultimately taking iron ore production to over 40Mtpa with further carbon steel commodity projects both in Australia and overseas."

"Atlas now has the balance sheet, cashflows and expertise to fulfil its ambitious growth strategy. At the same time, it will maintain its commitment to being a major contributor to the communities in which it operates."

While our focus remains on creating shareholder value via timely delivery of our expansion projects we also highlight it has always been our ambition to commence and sustain a return of a portion of profits to shareholders. The Board has therefore declared an unfranked dividend of 3 cents per share.

Shareholders are advised that the Record date will be 26 September 2011.

Atlas will strive to deliver stable and growing dividends ("Progressive" dividend policy) as it grows its business into a significant mining company. Atlas expects future dividends in the near term to remain unfranked. 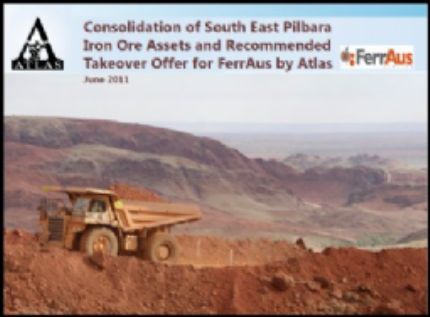