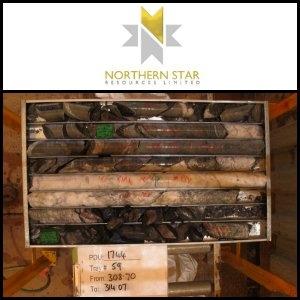 ASX:NST) has discovered a potential gold bearing quartz lode immediately adjacent to its Paulsens gold mine in Western Australia, which has produced over 460,000 ounces of gold. This is a very encouraging result for the Company, which has embarked on an aggressive expansion strategy to target production of 80,000-200,000 ounces of gold. The Company has planned further drilling to test the new discovery.

ASX:HGO) has commenced production from a process plant at its Kanmantoo copper mine in South Australia, marking its transition from a developer to a producer. Kanmantoo is an open-cut mine with an initial throughput of 2.4 million tonnes per annum, producing approximately 80,000 tonnes of concentrate, containing about 20,000 tonnes of copper metal and 10,000 ounces of gold per annum.

ASX:MDO) today announces the final results from drilling of the Southwest Breccia epithermal gold shoot at Lobo, the Philippines. The results confirm high-grade mineralisation close to surface as well as deeper extensions of the mineralized shoot. Future programs will target the mineralized shoot down plunge.