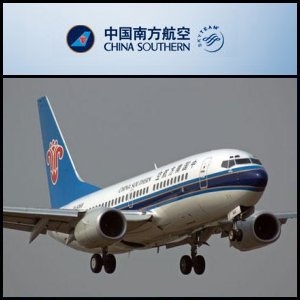 SHA:600029) has become a major international sponsor and the official airline for Sydney Festival 2012, which opens from 7 January to 29 January 2012 in Sydney. China Southern Airlines is the first Chinese company to sponsor Sydney Festival, Australia's most vibrant summer festival of arts and performances. The sponsorship worth A$600,000, is part of China Southern Airlines' strategic expansion in the Australian market. The Company has been flying into Sydney for over 10 years, with additional flights to Melbourne and Brisbane and a new direct Perth service added in 2011. It is currently offering Australians flights into China and 132 cities worldwide.

SHA:600060) was honored with the "Value Innovation Award" for its I'TV2 product at the International Consumer Electronics Show (CES) in Las Vegas on January 10th. This is the first time a Chinese enterprise has secured the highly competitive CES award. Hisense' I'TV has become a very popular product in China since it was launched at the end of 2011. It is the world's first personalized Smart TV, built specifically as a tablet but with all the functions of a TV.

TYO:6366) says that its joint venture company with JGC Corporation (

TYO:1963) and Kellogg Brown & Root has been awarded an engineering, procurement and construction ("EPC") contract for the Ichthys LNG plant facilities in Australia. The overall EPC contract value is expected to be around US$15 billion. The Ichthys LNG project is an integrated natural gas field development project, which will produce 8.4 million tonnes of LNG, approximately 70% of which is to be delivered to Japan.

Elecom Co., Ltd. (JASDAQ:6750) has unveiled its latest USB products, which features a function for encrypting stored data through a strong encryption algorithm called AES 256 bit. In addition, the USB products have superb security function, embedded with anti-virus program Trend Micro USB Security(TM) 2.0, which can protect the data on flash drive and PCs that it connects to.