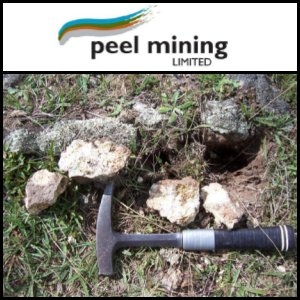 ASX:PEX) is pleased to announce that Peel and CBH Resources Limited (

ASX:CBH), a wholly owned subsidiary of Toho Zinc Co Ltd., have signed a binding Heads of Agreement related to EL7461 and ML1361, which includes the Mallee Bull copper-polymetallic discovery near Cobar.

Under the agreement, CBH has the right to earn an interest of up to 50% over a three-year period through staged expenditure on exploration and a contribution to previous exploration costs incurred by Peel.

CBH Resources is an Australian-based mineral resources company producing zinc, lead and silver from the Endeavour Mine north of Cobar. The company, which is 100%-owned by Tokyo Stock Exchange-listed Toho Zinc, is also commissioning the Rasp underground zinc, lead and silver mine at Broken Hill.

CBH brings a wealth of technical expertise and resources to Mallee Bull, particularly with regards to exploration and development within the Cobar Superbasin, and Peel looks forward to working with CBH at Mallee Bull, which is possibly the most significant mineral discovery in the Cobar District over the past 10 years.

"Peel welcomes CBH Resources as the company's partner at Mallee Bull and the wider May Day-Gilgunnia project area. The recent results we have reported have confirmed the Mallee Bull prospect as a true greenfields copper-dominant discovery, and we believe that attracting a partner of CBH's calibre is testament to the excellent potential of Mallee Bull. As an established producer in the Cobar region, CBH brings years of local experience to the project, and we look forward to working with CBH as exploration at Mallee Bull progresses."

The key terms in the Binding Heads of Agreement between Peel and CBH are:

- Peel to be responsible for exploration activities (operator).

- Stage 1 of the Farm-in sees CBH earn a 15% interest in the project by making a payment of $1 million to Peel (within 14 days of the condition precedent being satisfied) as contribution to past expenditure and by contributing $1.5 million to eligible exploration expenditure within a 12 month period.

- Stage 2 of the Farm-in sees CBH (at its election) earn an additional 15% interest in the project (30% total interest) by contributing a further $2.5 million to eligible exploration expenditure within a 12 month period.

- Stage 3 of the Farm-in sees CBH (at its election) earn an additional 20% interest in the project (50% total interest) by contributing a further $3.33 million to eligible exploration expenditure within a 12 month period.

- CBH may elect to form a joint venture at the end of any stage and the parties can then elect to contribute on pro-rata basis or be diluted according to an industry-standard dilution formula.

In March/April 2011, Peel began targeting a newly-recognised coincident EM and magnetic geophysical anomaly located within the historic 4-Mile goldfield. The 4-Mile goldfield comprises up to 60 shafts and workings spread over an area covering about 1,000m by 500m.

The Mallee Bull prospect is located less than 10 kilometres east of the May Day gold-silver-lead-zinc deposit (ML1361), where drilling in 2010 confirmed the down-dip continuation of mineralisation to more than 200m below surface.

Link: CBH to spend up to $8.33m farming-in to Mallee Bull 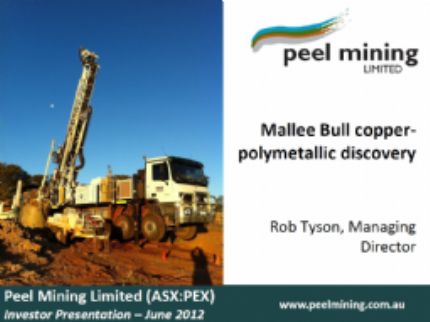