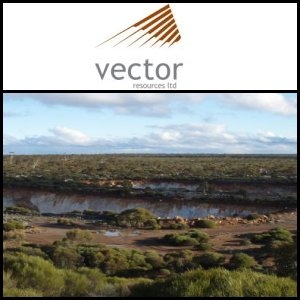 ASX:VEC) is pleased to announce that it is in a position to update the market on the current status of the company's Gwendolyn near term production strategy.

The results from this partially completed program have been outstanding with the mineralisation envelope continuing to expand and it is currently open in all directions. The Geology team have been developing the structural and geological model, with the assistance from consultants such as SRK, on the current mineralisation envelope. During this process the team have identified six super high grade zones within the current mineralisation envelope. The most recent of these was released on the 30th May 2012 with an intercept of 5m @ 253.33 g/t from 24m including 1m @ 1,165 g/t from 26m down hole. The super high grade lode has been identified with gold mineralisation within the Goethite and quartz veins which are represented in Figures 1 to 4.

The Phase 3 program as of 6th June 2012, has 38 holes remaining in the program with two rigs currently operating on site. Once this program is complete the team will commence the Phase 4 PoW drill program that was approved by the Department of Mines and Petroleum (DMP) in May 2012. This program is a blanket 20m by 25m grid pattern over the entire tenement excluding the old airstrip and buffer zone. The intention of this program is to carry out additional RC and DD holes that will continue to explore for the boundaries of the mineralisation envelope, continue to maintain drill density for indicated or better JORC resource classification and further geotechnical analysis for final pit wall profiles. This program will also cover sterilisation drill requirements for potential future infrastructure sites.

The Company recently achieved a major milestone with the Gwendolyn project having the previous prospecting lease P77/3976 converted to a mining lease M77/1263. With this approval the previous conditions associated with the old airstrip and its buffer zone were removed. As a result of this, a Phase 5 PoW is currently being lodged with the DMP to cover the old airstrip and its associated buffer zone to ensure that if the mineralisation envelope continues extending north-west to the airstrip there will be no delays in drilling while awaiting PoW approval.

The April 2012 autumn flora survey was extremely favourable with no significant issues identified. The vegetation in the survey area was not considered to have a high conservation value and is not considered likely to be a threatened or priority ecological community.

Preliminary metallurgical test work commenced in November 2011 on a range of composites from the Stage 1 and 2 drill programs. This work is being further developed with the use of the eight diamond core holes drilled during February to April 2012. Mineral Engineering Technical Services Pty Ltd (METS) have been engaged by the Company to conduct the detailed metallurgical test work for the feasibility study.

This test work will identify flow sheet, mass balance and process facility design based on a modular system of 500,000 tonnes per annum. The facility will incorporate a crush and grind circuit feeding into a gravity plant with CIP tail. This work is currently underway and the timing for completion is in line with the scheduling of the mine feasibility.
The Company is continuing the exploration drilling program on site prioritising extensional and then infill drilling while results are pending. The aim of defining the mineralisation envelope boundaries and obtaining indicated status for the majority of the resource is a major priority. The Company is currently in the process of completing an internal resource upgrade of Gwendolyn. Once the consolidation of the geological, structural and assay data bases is completed SRK will be engaged to complete an independent resource upgrade that will be utilised for pit optimisation and mine design. This work is scheduled to commence towards the end of June 2012.

Mine feasibility work will commence when the resource is of sufficient size and at least two of the mineralisation boundaries are identified. This process is currently scheduled for the third quarter Calendar year (CY) 2012. Consultants and preferred mining contractors have been put on notice to complete tenders and feasibility works during that period. Results from the RC and DD holes drilled to date indicate that the mineralisation envelope to a depth of at least 95 metres will be mineable without drill and blast activities. This will be a major factor in keeping the operation cost for mining and processing at potentially lower than industry averages.

The second stage of the environmental survey is scheduled to commence early in September for the spring survey. This report will build on the autumn survey and is currently scheduled for completion by the end of September 2012 and will form part of the associated documentation required for submission of a mining proposal to the DMP.

Provided there are no unforseen delays in the feasibility study and the economics continue being favourable, the Company intends to submit a mining proposal for Gwendolyn early in October 2012.

Based on discussions and previous meeting with the DMP and ensuring that all criteria have been addressed it is anticipated that approval could be obtained within eight weeks from lodgement. If this schedule can be maintained site infrastructure works could commence at the end of 2012 with potential commissioning of plant and associated support infrastructure being completed early in the new year.

Mt Dimer is one of the Companies' gold assets located approximately 95 kilometres from Southern Cross. Previously mined between 1989 - 1997 during a time when gold prices was below $300 US an ounce. The Company spent more than six months compiling four separate sources of electronic and hard copy data on Mt Dimer from previous owners into one complete data set. The completion of this work has allowed the exploration team to focus on areas that were diffident on information and provide real exploration targets.

The company during May to August 2011 carried out two rounds of geochemical auger drilling on spacing's of 40m x 100m and 50m by 100m to depths of three metres. Work of this nature by the previous owners had not been carried out to a suitable standard and in the majority of cases failed to penetrate the transfer layer of the surface material. The results of this program identified 17 new green-field targets and four extensions to historic open pits and a large potential laterite deposit.

These additional 22 exploration targets identified in the geochemical analysis also align with the aeromagnetic results of significant structures. These two exploration tools give the exploration team a high level of confidence in the targets as the six historic open pits also have the aeromagnetic and geochemical data aligning. The Company has applied to the Department of Mines and Petroleum (DMP) for a Program of Works (PoW) totalling 24,150 RAB drill metres to explore these targets. This program is currently awaiting approval and once approval has been obtained the drill program will commence.

Mt Dimer has a current active PoW for Reverse Circulation (RC) drilling that has 7,323 metres remaining to drill. These holes are targeting near mine locations of Karli West, Frodo, Golden Slipper and LO1,2,3 and 4. This current program will be completed in conjunction with the pending RAB program to ensure that the geology team are fully utilised while at Mt Dimer.

On successful completion of the RAB drill program areas identified with potential mineralisation will be further explored with RC and diamond core drilling. The intention of the Company is to continue to develop and expand the resources at Mt Dimer to a size where the project can support a standalone processing facility that has the potential to toll treat additional ores from other Company projects within transportable distances.

The Earaheedy joint venture between Cazaly (

ASX:CAZ) and Vector has progressed on multiple fronts. An RC program commenced in late May. This drill program comprises 20 RC drill holes for approximately 1,670m within Exploration Licence E69/2063 (Hawkins Knob) targeting from surface manganese mineralisation at the Blue Cliffs and Blue Nugget prospects. The RC drilling campaign is scheduled for completion in June 2012. The results from this drilling will be analysed to provide new potential targets for further drilling.

LON:AAL) farm-in agreement has consisted of multiple site visits conducting surface geological mapping of the Cecil Rhodes and Sydney Heads outcrops. Mapping to date in combination with recently interpreted aeromagnetics have identified significant targets to explore. Anglo American intends to continue their field work and mapping programs to assist with refining potential drill targets. Currently drilling is scheduled for the third and fourth CY quarter of 2012.

To view the complete Vector Resources announcement including Figures 1 - 8, please click the following link below:
http://media.abnnewswire.net/media/en/docs/ASX-VEC-592430.pdf

Vector Resources Limited (ASX:VEC) is a Western Australian focussed resource company with a corporate vision of acquiring and developing highly prospective resource assets that have the capacity of adding significant shareholder value. 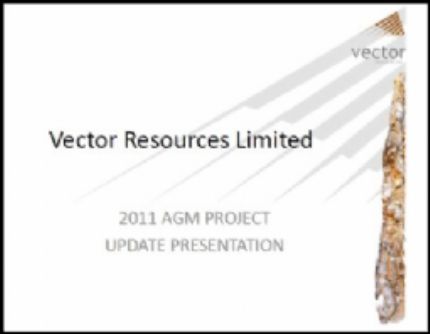