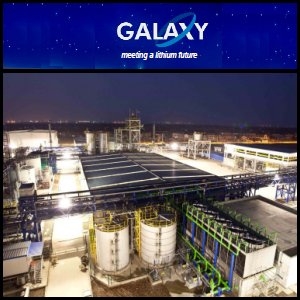 ASX:GXY) following the successful merger with Lithium One Inc (

CVE:LI) is pleased to detail its global lithium resource base and assets in four continents world wide.

Galaxy owns 100% of the Mt Cattlin lithium mine and processing plant in Western Australia ("Mt Cattlin Mine") which is designed to produce 137,000 tpa of spodumene, a lithium bearing mineral, as a dedicated feedstock for the Company's downstream lithium carbonate plant in Jiangsu, China.

The James Bay lithium pegmatite project in Quebec is an extensive high-grade spodumene pegmatite deposit that occurs at surface. Situated adjacent to key infrastructure including high-tension power, roads and readily accessible water, James Bay is well located to potentially provide a stable supply of lithium to the emerging lithium battery sector in the northeast United States and Eastern Canada. James Bay has a NI 43-101 compliant resource of 22.2 Mt at 1.28% Li2O.

The Sal de Vida lithium and potash brine project in Argentina is Galaxy's flagship property and is situated in the lithium triangle. The lithium triangle (where Chile, Argentina and Bolivia meet) is currently the source of 60% of global lithium production. Lithium is found in the brine (salty water) below the dry lake beds (called salars) at high altitude. There are only two producing areas in the lithium triangle; Salar de Atacama in Chile and Salar del Hombre Muerto in Argentina. Sal de Vida is located close to projects owned by major lithium producer FMC Lithium, which in 2011, produced 16% of the global lithium supply. Sal de Vida has excellent promise as a future low cost brine mine and lithium carbonate processing facility.

Galaxy's Battery Division has completed a feasibility study to build a lithium-ion battery plant in Jiangsu, near to the existing Jiangsu Lithium Carbonate Plant. Proposed production is 620,000 battery packs per year for the e-bike market. The Company has aligned with a turn-key Korean battery plant builder acquired a technology licence from K2 Energy; acquired land in Jiangsu; secured 80% of production in offtake arrangements and has received funding interest from three major Chinese banks. The Galaxy Board will be seeking divestment or joint venture partnerships for this project.

- The Mt Cattlin Mine, an operating lithium mine which contains the third largest JORC-compliant (or similar) hard rock lithium Ore Reserve globally;

- The Jiangsu Lithium Carbonate Plant, which will be the largest and most modern hard rock lithium carbonate plant in the world;

- The James Bay project, a longer term development project which presents a future opportunity to supply the North American market; and

Galaxy's cathode partners in China represents the top and most advanced manufacturers of lithium cathode materials of the Peoples Republic of China.

Mitsubishi Corporation (MC) is Japan's largest general trading company with more than 200 bases of operations in approximately 80 countries worldwide. Mitsubishi employs a multinational workforce of approximately 60,000 people across some 500 companies. Mitsubishi has long been engaged in business with customers around the world in virtually every industry, including energy, metals, machinery, chemicals, food and general merchandise.

GS Caltex is one of the largest energy companies in Korea and is jointly owned by the Korean conglomerate GS Holdings Corp and Chevron. Over the past 40 years, GS Caltex has expanded its petroleum and petrochemical businesses to include city gas, electric power, exploration & production, convenience retail, e-business and New and Renewable Energy, to become a globally competitive total energy service provider.
"We have the lithium battery producing triangle covered" Iggy Tan, MD Galaxy To view the complete Galaxy Resources announcement including Figures, please click the link below:
http://media.abnnewswire.net/media/en/docs/ASX-GXY-595517.pdf