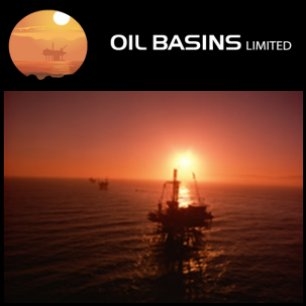 Wireline logging operations were completed late on 30 October 2012 and after analysis of the Schlumberger Quadcombo data by OBL's petrophysicist, it was determined that all zones were water wet and a MDT run was not warranted.

Plug and Abandonment operations have commenced and the Dynamic Drilling Rig#17 is expected to be released on 1 November 2012.

With the drilling of East Blina-1, the Backreef Play Agreement farmin commitments are now complete.

The drilling of the East Blina-1 exploration well has provided the following valuable information:

a) Firstly, preliminary analysis of the wireline logs has greatly increased the knowledge of the extent of the dolomitic reservoir interval (intra Yellow Drum reservoir) first encountered at Backreef-1.

b) Preliminary correlations of formation tops have confirmed that this porous and permeable zone within the Kimberley Downs Embayment extends from the western boundary of the Backreef Area to Backreef-1 in the east (some 3.7 km distant).

d) OBL has demonstrated that, with deployment of a 'small footprint' modern mobile drilling rig, future oil exploration wells targeting Laurel / Yellow Drum reservoirs within the Backreef Area can be drilled at a reasonable cost.

e) This has potentially significant implications for future exploration in the Canning Basin where the Laurel is present.