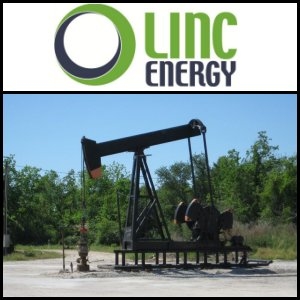 ASX:LNC) (OTCQX:LNCGY) is pleased to announce that it has commenced operations for its winter drilling campaign at the Company's Umiat oil field on Alaska's North Slope with construction of the snow road underway.

Linc Energy anticipates that peak production could be approximately 50,000 barrels of oil per day (gross).

A total of 12 "legacy wells" have been drilled within the lease area between the years 1944 and 1979. Historical well testing at Umiat has determined that the oil is light, sweet crude with a 37 API gravity and a pour point of less than -5 degrees Fahrenheit.

Linc Energy's winter drilling program will mark not only the first drilling at Umiat since the late 1970s, but will be the first time that modern arctic drilling techniques will be applied to the Umiat reservoirs.

The winter drilling program includes the drilling and testing of shallow vertical and horizontal delineation wells in the Lower Grandstand Formation, as well as drilling and testing of a deep exploration target. The information gained from this program will help to validate the geological model, define the extent of the reservoirs, determine oil and rock properties for input into a reservoir simulation model, determine comparative production rates for horizontal and vertical completions and gather information on deeper reservoirs.

Drilling operations are anticipated to last through late April 2013.

The Umiat oil field is located on the Alaskan North Slope, approximately 60 miles north of Anaktuvuk Pass, Alaska and approximately 60 miles south of Nuiqsut, Alaska. It is just inside the eastern boundary of the Northeast Planning Area of the NPR-A, along the Colville River and managed under the rules and guidelines established for the NPR-A.

Pre-packing operations have commenced for the development of the 100-mile snow-packed access road which will support the upcoming winter exploration and delineation drilling program at the Company's Umiat oil field on Alaska's North Slope.

The 100-mile snow-packed road will begin at the Dalton Highway near Pump Station 2 of the Trans-Alaska Pipeline and continue eastward to Umiat which is located just inside the eastern boundary of the NPR-A. The snow road will be used to move equipment and supplies in and out of Umiat over the course of this winter's drilling program. It will take approximately 30 days to complete the snow road development.

Mobilization of the man camp, drill rig and related support equipment into Umiat will commence on or about 15 December 2012, at the completion of snow road construction.

While the rig and support equipment are en route to Umiat, development of the in-field ice roads and ice drill pads will commence. NPR-A and North Slope Borough rules require that all in-field roads and drill pads be constructed of ice during the exploration and pre-development drilling phases. No gravel structures can be constructed until there is a fully approved Master Plan of Development.

Four wells are initially planned for Umiat this winter program.

The DS#1, a Class 2 (oilfield waste) disposal well will be the first well drilled in the 2012-13 program, and is scheduled to spud on or about 18 January 2013. The DS#1 allows for the local disposal of drilling fluids and waste.

After the completion of the DS#1, the Kuukpik #5 drill rig will be moved up the hill to the northwest to location of Umiat #16, which will be drilled vertically into the Lower Grandstand oil sands. Four 60-foot sections of core will be pulled from the Lower Grandstand, kept frozen and analyzed after extraction. Umiat #16 will be flow tested after completion.

Once #16 has been drilled, the rig will be skid over approximately 10 feet and Umiat #16H, a horizontal well, will be drilled directionally into the same Lower Grandstand intervals being tested in the #16. A side-by-side test of the #16 and #16H is important for assessing the performance of the horizontal production well in contrast to the vertical producer.

Two additional holes have been permitted (Umiat #18 and Umiat #19), as alternate locations for placement of wells in this winter's program. One or both of these wells could be drilled if time allows.

Crude oil samples will be taken for assay and further analysis and all wells will be drilled using mineral oil-based muds.

Demobilisation from the Umiat location will commence by late April 2013.