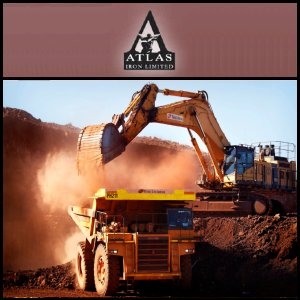 Atlas On Track for 10Mtpa from Q4 FY2013
Perth, Nov 14, 2012 AEST (ABN Newswire) - Atlas Iron Limited (AGO) is pleased to advise that it remains on track to sustain exports at a rate of 10Mtpa by the June 2013. The progress towards further production growth comes as Atlas achieved record shipments of 700,000 tonnes (wet) in October 2012.

Atlas has also made significant progress towards its longer-term production target of 46Mtpa, securing environmental approvals for its South-East Pilbara mines and associated rail spur development options. These approvals give Atlas the flexibility to proceed quickly with these South-East Pilbara developments as and when it believes it is in the best interests of shareholders to do so.

Atlas Managing Director Ken Brinsden said these key achievements showed Atlas was on track in respect to both its near-term production targets and its options for longer-term growth.

"Atlas' has a proven ability to develop highly competitive mining operations, with low capital and operating costs," Mr. Brinsden said. "Shipping at a rate of 10Mtpa from June next year growing to 12Mtpa in December 2013 can only improve our economies of scale."

Mr. Brinsden said the approvals for the South-East Pilbara mines were part of Atlas' strategy to maximise the flexibility associated with its Horizon 2 developments.

"The environmental approval for the SE Pilbara mine and rail spur options is a key step in demonstrating the strong commercial ore haulage opportunity available to either the owners of existing or planned Pilbara rail networks."

"With our strong cash position and our recently announced underwritten US$325M loan facility, we have the capacity to complete our remaining Horizon 1 projects - Mt Dove, Abydos, Mt Webber and the Yard 2 Expansion at Utah Point Port - increasing the Company's resilience to market volatility while progressively increasing shipments and cash flows."

Atlas shipped a record 700,000 wet metric tonnes (wmt) of iron ore during the month of October from its Utah Point facilities within Yard 1. This monthly result shows Atlas has the capability to haul to port and ship at an annual rate of 8.4Mtpa using existing port capacity in the Yard 1 facilities at Utah.

Works are well underway on the further development of Utah Point Yard 2 to accommodate the additional tonnages that will flow this financial year from the start of production at the Mt Dove and Abydos mines. These works remain on time and on budget.

Atlas remains on track to grow its production capacity to 10Mtpa from June 2013 with the awarding of major contracts for construction, processing and mining services at its Abydos mine. These contracts, awarded to MACA Limited (

ASX:MLD), provide more evidence that Atlas' growth strategy is on target, with production at Abydos scheduled for June 2013.

The Abydos mining services contract comprises production drilling, blasting and run-of-mine loading and haul, with the pre-strip work scheduled to commence in December 2012.

The Abydos crushing services contract will see MACA develop and operate a crushing and screening plant for Atlas. Abydos is on target to produce the first run of mine ore by the end of the June 2013 quarter.

Mining services have commenced at Atlas' Mt Dove mine, with the first blast at the mine occurring on 28 October 2012. Atlas has previously advised it expects to see production from the Mt Dove mine increase its North Pilbara production rate to 8mtpa in the March 2013 Quarter, and while the mine life at the project is relatively short, the grade contribution will enhance the overall Atlas Pilbara blend. Atlas' Mt Dove mine remains on time and on budget.

ASX:AGO) is pleased to advise that it has received state and federal environmental approvals for its proposed South-East Pilbara mines and connecting rail spurs, marking another key milestone in its strategy to grow production to 46 million tonnes a year.

The environmental approvals cover the Davidson Creek and Robertson Range mines, which are earmarked to produce at approximately 15Mtpa. They also cover rail alignments which would connect these mines to either FMG's existing railway or the railways proposed by Roy Hill Infrastructure or QR National.

The decision to obtain the approvals is part of Atlas' plan to have the ability to grow production as and when the Company believes its expansions will generate strong shareholder returns.

View the complete Atlas Iron announcement including Figures at the link below:
http://media.abnnewswire.net/media/en/docs/ASX-AGO-613584.pdf