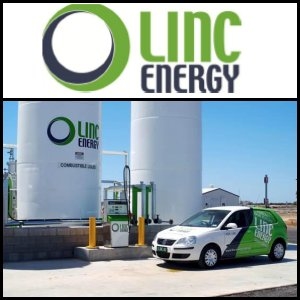 LER is the head entity of the Company's Oil and Gas Group headquartered in Houston, Texas. As previously announced, on 12 October 2012 the Company though its wholly-owned subsidiaries issued $US265 million of senior secured notes (Notes) bearing interest at 12.5% per annum due 31 October 2017.

The Company is required under the terms of these Notes to report periodically on production and financial results of LER. All results quoted are based in US dollars.

During the first Quarter of 2013, LER focused on drilling and completing new wells as well as recompletions of existing wells within its core acreage in Texas.

LER commenced pre-packing operations in the development of the 100-mile snow-packed access road which will support the winter exploration and delineation drilling program at the Company's Umiat oilfield on Alaska's North Slope. Mobilization of the man camp, drill rig and related support equipment into Umiat will commence in December 2012 upon completion of snow road construction. Drilling operations are anticipated to last through late April 2013.

Mr Peter Bond, CEO of Linc Energy, said "Scott Broussard, Linc Energy's President of Oil & Gas division, and I remain confident that the oil & gas team will meet the production target of 6,000-7,000 barrels per day by the end of December this year. This last Quarter has set the oil & gas division up for an exciting 12 months of increased production and resource expansion. It is also fantastic to see that the Umiat winter drilling program has started, with the commencement of construction of the snow road to the field on time and on budget."

View the full Linc Energy announcement at the link below:
http://media.abnnewswire.net/media/en/docs/ASX-LNC-706630.pdf