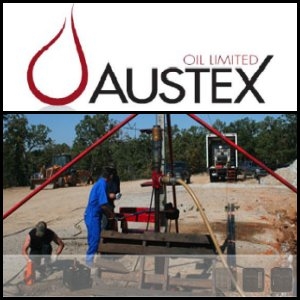 Drilling operations on the #21-4 well have successfully reached TD at 4,652 feet. Samples and logs recorded excellent oil and gas shows in multiple formations including the target Mississippi Lime from 4,252 to 4,593 feet - 340 feet thick with 40 feet of chat.

The well has been cased and will be completed for production testing over the coming 3-5 weeks.

The drilling contractor is to move onto the location of the Swankee #24-2 well in the next few days. This well is located 3 miles east of Production Hub No 2 and is located in Section 24 Township 24N Range 1 East. This will be the first well drilled in this 640 acre Section and will target the Mississippi Lime with an expected TD of 4,750 feet.

Executive Chairman Richard Adrey commented: "The team is doing an excellent job of delivering on its operational objectives during a sustained period of inclement weather, with drilling and hydraulic fracturing still meeting the company's stated development targets.

"AusTex recently brought a number of new vertical wells into production which are adding to our daily production rate, and we look forward to reporting flow rates once these wells have been producing for 30 days."