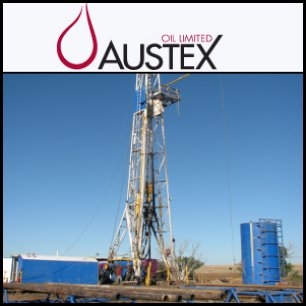 ASX:AOK) (OTCQX:ATXDY) is pleased to announce that it has commenced exploration drilling in Kansas with the first well spudded at the Colby Prospect , Thomas County, in which AusTex holds a 70% Working Interest.

The operator, Castle Resources Inc. has reported that drilling is underway on the Eller Chase Unit #1 well. Located approximately three miles south of the town of Colby this is the first exploration well on the 15,500 acre Colby Prospect drilled since the acquisition and interpretation of 3D seismic data, undertaken in 2012.

The well has a projected Total Depth of 5,100 feet through the Arbuckle Formation and is targeting shallower formations including the Lansing Kansas City Limestone, Cherokee Sand and Mississippi Lime formations.

Currently the rig is drilling ahead at 3,600 feet with the Lansing Kansas City interval expected to be intersected at approximately 4,200 feet where testing will begin. Drilling operations will continue for another 7-10 days, and the rig will then to move to the next exploration well permitted at the Colby Project, the Steel #1 (see map below).

Historical data from a well drilled in 1959 recorded the top of the Mississippi Lime at 4,790 feet below surface. The nearest current oil production is from the Lansing Kansas City formation from a well located three miles east of the Eller Chase No. 1 (see map below - referenced as 'nearest current oil production'). No current production has been recorded in the Mississippian in the immediate area, and the company remains hopeful of the prospects for this play.

Executive Chairman Richard Adrey commented: "Last year AusTex invested in a 3D seismic shoot which illustrates multiple possibilities and highlights as many as 20 four-way structural closures within the Colby project. We have confidence in our Kansas acreage and our exploration initiatives here are an important potential asset for us but will not divert our activities from Snake River.

"Two historical wells were drilled in the prospect area in 1959 and 1966 with each intersecting the Lansing Kansas City, Cherokee Sand and Mississippi Lime formations. We intend to drill the Eller Chase through the underlying Arbuckle Formation with the data collected to be used to further our understanding of the project's potential.

"While we are firmly focused on continuing to develop our Snake River Project in Northern Oklahoma which is progressing to plan, our Kansas acreage represents an exploration play with potential for new discoveries in known intervals. We currently have oil production at our Cooper Project from the Lansing Kansas City formation, and we are further encouraged by the fact that Apache Corporation has drilled its first Mississippian well to the south of that lease.

Activity in the Mississippian play continues to expand in Kansas, and we are keen to learn more about the potential of our leases in Thomas and Sheridan Counties."

In the coming weeks AusTex will update shareholders on new vertical wells that are coming on stream at Snake River and the corresponding 30-day flow rates, as well as updates on the vertical well drilling program which is continuing at six wells per quarter.