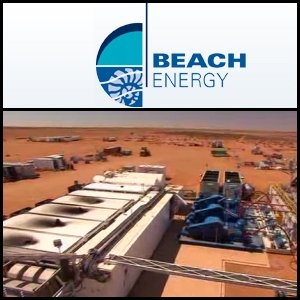 ASX:BPT) advises that four oil discoveries, consisting of three in PEL 91 (Beach 40% and operator, Drillsearch Energy Limited 60%) and one in PEL 92 (Beach 75% and operator and Cooper Energy Limited 25%), as well as a further development well interesection in the Bauer oil field in PEL 91, have recently been achieved.

This success supports recent record daily net oil production, in excess of 10,000 barrels of oil per day ("bopd"), through the oil trunkline from Lycium into Moomba (Beach 60% and operator, Senex Energy Limited 40%).

The Kalladeina-2 exploration well, located 13 kilometres north of the Bauer oil field, encountered a gross oil column of eight metres in the McKinlay/Namur interval, with net oil pay of approximately five metres. The McKinlay interval was drill stem tested and flowed oil to surface at a rate of 986 bopd. The well has been cased and suspended as a future oil producer.

The Sceale-1 exploration well, located 4.5 kilometres south of the Kalladeina-2 well, encountered a gross oil column of six metres in the McKinlay/Namur interval. The McKinlay zone was flowed at a rate of 830 bopd during a drill stem test. The well has been cased and suspended as a future oil producer.

The Congony-1 exploration well, located two kilometres southwest of the Kalladeina-2 well, encountered a gross oil column of approximately six metres in the McKinlay/Namur interval. A subsequent test of the McKinlay zone resulted in the recovery of 41 barrels of clean oil, equivalent to a flow rate of 239 bopd. The well has been cased and suspended as a future oil producer.

The Bauer oil field has had its tenth well drilled confirming the eastern flank of the field, with Bauer-10 intersecting an 11 metre oil column as prognosed. The Bauer oil field is the largest Western Flank field with estimated gross recoverable reserves of over 10 MMbbl.

The Rincon North-1 exploration well, located 1.5 kilometres north of the Rincon-1 well, encountered a gross oil column of seven metres in the McKinlay/Namur interval, of which about two metres is high quality Namur Sandstone oil pay. The well has been cased and suspended as a future oil producer.

Each of these discoveries is likely to warrant follow-up appraisal and development drilling once the well results have been integrated and the initial production performance confirms productivity.

Beach has recently reached agreement with the South Australian Cooper Basin Joint Venture to increase the flow of oil through its operated trunkline into Moomba. This has resulted in a peak oil flow rate from the Western Flank of more than 10,000 bopd (net to Beach) through both flow lines as well as via trucking.

Reg Nelson, Managing Director of Beach, said: “The oil exploration success Beach is having on the Western Flank of the Cooper Basin is being driven by recently acquired 3D seismic data. The subsequent analysis of the prospects and leads generated from this 3D data is reflected in the success rate of oil exploration wells increasing from around 25% on 2D seismic, to almost 50% on 3D. This clearly shows the role that technology and our quality technical people are playing in the continued unlocking of areas such as the Western Flank. Beach targeted net 10,000 barrels of oil per day from the Western Flank in the June quarter, and I am very pleased to see that this has recently been achieved.