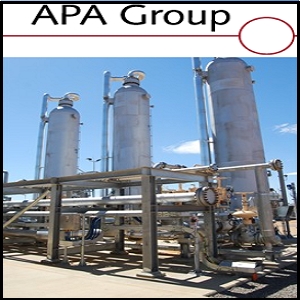 The new agreement, which has services commencing in September 2015, is for an initial term of seven years with an option for up to a further three years, making use of available pipeline capacity and without further significant capital investment by APA. The agreement provides for flexible gas transportation services from multiple receipt and delivery points on the grid - in particular utilising the Moomba Sydney Pipeline - as well as gas storage services. The total minimum revenue for the initial term exceeds $80 million.

APA Managing Director Mick McCormack said, "Our interconnected grid on the east coast is opening up a new range of services and providing shippers with new flexibility in how they manage their upstream and downstream portfolios.

"Against the backdrop of a very dynamic gas market in the south east of Australia we are optimising the use of our existing assets, such as the Moomba Sydney Pipeline, as well as progressively developing our infrastructure and services in response to the requirements of our customers and the market."