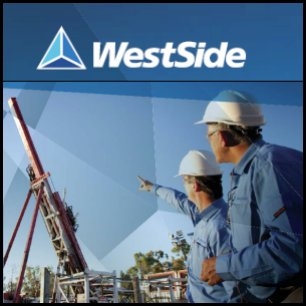 Reluctantly Recommends Shareholders Accept the Landbridge Offer
Brisbane, July 11, 2014 AEST (ABN Newswire) - As you may be aware, the Offer by Landbridge Energy Australia Pty Ltd (Landbridge) to acquire all of the shares in WestSide Corporation Ltd (

OTCMKTS:WBRIF) has been declared unconditional and Landbridge has announced that the Offer price of $0.40 per WestSide Share is final (except if there is a competing offer for WestSide Shares) and will now close at 7pm (Brisbane time) on 22 July 2014 (unless further extended).

According to Landbridge's announcement on 11 July 2014, it now has a relevant interest in 49% of WestSide's Shares.

Landbridge's increased holding follows WestSide's announcement on 4 July that it understood that New Hope Corporation Limited, which was until last week one of WestSide's largest shareholders, had sold the majority of its shareholding and intends to sell the remainder of its shareholding in WestSide, if it has not already done so, enabling Landbridge to exert significant influence over WestSide in the future.

WestSide's Directors have consistently recommended that Shareholders take no action in relation to Landbridge's Offer because, amongst other things, it fails to adequately recognise the full value for Shareholders from the new gas sale agreement with GLNG and other assets owned by WestSide. We have worked hard to solicit alternative interest in the Company, but despite discussions with a number of parties no alternative proposal has been forthcoming.

Landbridge's effective control of WestSide means that it will be in a position to substantially determine the composition of the WestSide Board and senior management and the strategic direction of the Company, including the method and source of funding for the development of its assets.

If Landbridge acquires a majority, but not all of the WestSide Shares, the number of WestSide Shares traded on the ASX in the future could be significantly reduced. WestSide Shares could become illiquid and infrequently traded and, as such, the ASX market price may no longer be a reliable indicator of value.

Having regard to all of these matters, WestSide's Directors have accordingly, and reluctantly, unanimously determined to recommend to remaining Shareholders that they accept Landbridge's Offer (subject to no higher offer being received).

Those Shareholders who choose not to accept Landbridge's Offer may enjoy future benefits if WestSide's current plans can be realised, but there are risks to this occurring which Shareholders need to consider in making their decision.

A more detailed discussion of the reasons for the Directors' revised recommendation is contained in WestSide's Third Supplementary Target's Statement dated 4 July 2014, which is available on the WestSide website www.westsidecorporation.com.
We have all worked very hard to reposition WestSide for success, so it is disappointing for all of us to see effective control of the Company pass at this price before any of the benefits from that success can be reaped.

On behalf of the Board and Management, I would like to thank all WestSide staff and contractors who have worked tirelessly over the last several years, and in particular over the last nine months, to extract value from our assets.

Lastly, I want to thank you as a WestSide shareholder for your past support.