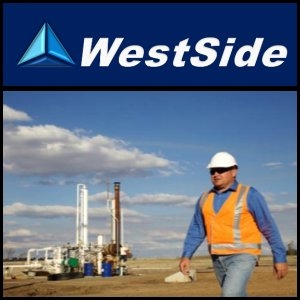 OTCMKTS:WBRIF) Quarterly Activities Report for the period ending June 2014, including the Landbridge Takeover, overview and outlook as well as sales for the period.

Landbridge Energy Australia Pty Ltd (Landbridge) has achieved control of WestSide following the Board's recommendation that shareholders accept Landbridge's Offer of $0.40 per WestSide share (subject to no higher offer being received) for the reasons set out in the Company's Third Supplementary Target's Statement dated 4 July 2013.

At the time of publication Landbridge had received acceptances for more than 90 per cent of the Company's issued capital.

Gas sales during the quarter remained steady at 11.6 TJ/day, with 10 months of stable production providing a solid foundation for the expansion of the Meridian gas field. The first phase of the field expansion at Meridian commenced during the quarter, with two new standalone lateral wells drilled. A third lateral well was finished in July and drilling is ongoing. The first lateral well is currently being completed with pumping equipment and is expected to be brought online within days.

Detailed planning continues for the expansion of the Meridian field to produce increasing volumes of gas to GLNG from 2015.

Proposals for financing facilities for the Meridian gas field expansion were received from several potential financiers and were being assessed at the time Landbridge gained control of WestSide in early July.

WestSide completed the sale of its drilling rig in May, receiving $3.5 million and also reached a favourable settlement of a legal dispute arising from damage to the drilling rig in 2012.

During the quarter there were no reportable environmental incidents or recordable injuries.

WestSide's net share of sales revenue from Meridian of $1.7 million, including compensation payments and processing fees, was lower than the $2.0 million received in the prior March quarter as the two year compensation period has ended in line with the agreement.