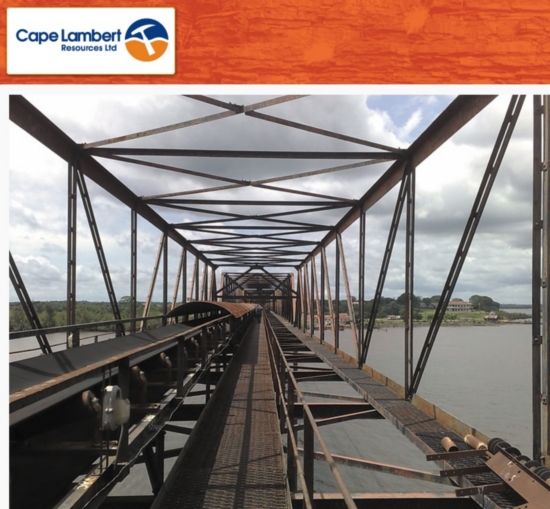 OTCMKTS:CMULF) is back on the hunt for investment and acquisition opportunities following the recently announced settlement with the Australian Tax Office.

Executive chairman Tony Sage said this has been a "huge overhang" for the Company over the past two and a half years and the company will now move forward to "what it does best"; acquire and invest in under-valued mining assets.

"The Company will be looking to capitalise on funding pressures within the resources sector through the evaluation and advancement of suitable investment opportunities that have been presented to it in recent months," Mr Sage said.

On August 1st Cape Lambert announced it had reached a settlement with the ATO over a $96 million notice of amended assessment issued by the ATO in 2012.

The remaining A$79 million liability was reduced to A$2.4 million as part of the settlement, and Cape Lambert will now have A$62 million in available carry forward losses to use against future taxable income.

What is of particular interest, especially in the current market, is that Cape Lambert will have a healthy balance sheet following settlement with cash, receivables and listed securities of A$94 million, including unrestricted cash of A$65 million and no debt.

Investment in new projects will be guided by the mantra of selecting undervalued assets that fit the bill of "what the buyers want"..

"At the moment the flavours of the month are graphite and lithium," Mr Sage said, "We will now go out with the cash in the bank with a more positive attitude in acquiring some assets."

Management focus will also shift back to existing projects in Cape Lambert's portfolio, including the Marampa iron ore project in Sierra Leone, where the company is in the process of obtaining a mining license.

Attention will also be paid to selling Cape Lambert's royalty interest in the Mayoko iron ore project, which the company negotiated as part of the asset sale to Stirling Minerals Limited (later renamed African Iron Limited), and subsequently taken over by South African miner Exxaro in March 2012. The royalty is equal to A$1 per tonne shipped from the project.

The Wolfsberg lithium project in Austria, owned by Global Strategic Metals Ltd (which Cape Lambert owns 28% of) is also scheduled for an AIM-listing in London to secure new investor support with a market more familiar with the project.
Sage said that the Company intends to implement a distribution to shareholders, the full details have not been determined as yet.

"The Cape Lambert Board, with the potential A$79M in liabilities removed from its balance sheet and its cash position now certain, will meet in the coming days to finalise plans for a distribution to shareholders, details of which will be announced in the next week," Mr Sage said.

The Company will also continue with its share buy-back which commenced in early 2014.

Cape Lambert's ability to go on the acquisition drive has been strengthened with the settlement with the Metallurgical Corporation of China Limited (MCC) recently, which saw the Company receive A$51.6 million for the disputed payment from the sale of the Cape Lambert magnetite iron ore project to MCC.