OTCMKTS:BALMF) today reported high-grade nickel-copper-PGE intercepts from each of the first eight holes targeting its recent Horizon 3 discovery on the Company's wholly owned Grasset Property in Quebec. All eight holes, which fan out from discovery hole GR-14-25 (1.79% nickel, 0.19% copper, 0.42 g/t platinum and 1.04 g/t palladium over 45.28 metres - (see NR14-11, May 20, 2014) intersected broad zones of high-grade nickel-copper-PGE mineralization similar to that observed in the discovery hole.

"Today's results confirm the discovery, and begin to outline the potential, of a high-grade nickel-copper-PGE sulphide zone within the Grasset Ultramafic Complex," said Darin Wagner, President and CEO of Balmoral. "On-going drilling continues to intersect broad zones of sulphide mineralization, both along strike from, and beneath, the holes reported today. With continued strong results, regional geophysical work on-going and the tendency of magmatic nickel sulphide systems to host multiple zones of nickel mineralization we are increasingly optimistic about the potential of this trend, which is 100% controlled by Balmoral."

The initial phase of testing has now successfully defined the local controls on the attitude, continuity and structural aspects of the Horizon 3 discovery. This has allowed on-going drilling to incorporate wider step outs and thus more efficiently and rapidly expand the size of the mineralized zone. Of the holes reported today, only hole GR-14-27 was drilled deep enough to test mineralized Horizon 1. Disseminated nickel sulphide mineralization was successfully intersected over a down-hole length of over 60 metres along the base of the intrusion (Horizon 1) returning 60.46 metres grading 0.35% nickel.

Drill hole GR-14-34, the south-eastern most of the current Horizon 3 test holes, intersected a zone of deformed ultramafics cored by a quartz porphyry dyke near the projected level of the Horizon 3 sulphide zone. This porphyry cored section is currently interpreted to represent a roughly east-west trending, near vertical fault (the "QP Fault"); offsetting the Horizon 3 stratigraphy in this area. The presence of Grasset Ultramafic Complex rocks on both sides of the fault suggests limited lateral offset along the fault. Drilling to the southeast will resume once detailed magnetic data being collected from the on-going airborne survey of the Grasset Trend is received and processed.

Drilling continues at Grasset (and on the Company's Martiniere gold project 40 km to the west). In addition to the current airborne survey, which covers the Balmoral's Grasset, Fenelon, Jeremie South and Jeremie Properties (the 16 kilometre long "Grasset Nickel Trend"), down-hole geophysical surveys are also underway in the Grasset area.

The Company has been advised that GTA Resources and Mining ("GTA") has elected not to exercise their second option under the Northshore Option Agreement. As a result, the Companies will now form a participatory joint venture to further explore and develop the Northshore Property in Ontario. GTA will hold an initial 51% interest in the joint venture and be the initial joint venture operator. 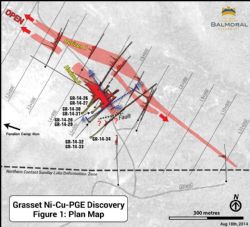 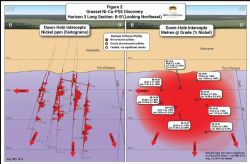 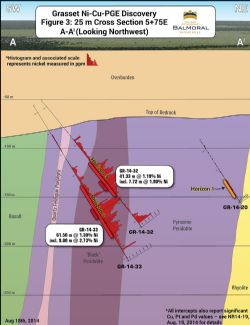