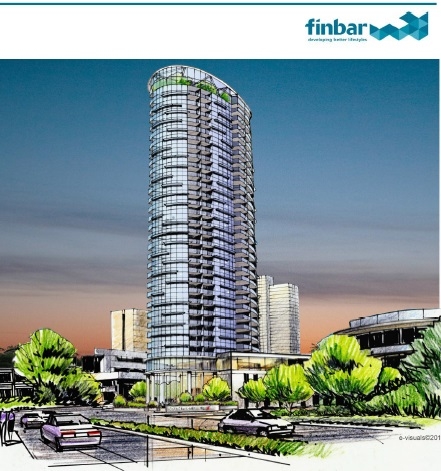 OTCMKTS:FNBRF), has revealed its plans to transform the Civic Triangle site in South Perth into an iconic commercial and residential precinct, worth more than 300-million dollars.

Finbar Group Limited and its joint venture partners have successfully secured the 7,206 square metre site from the City of South Perth.

Finbar Managing Director Darren Pateman says it will be the company's most exciting single stage project to date.

"Now what a fantastic opportunity, this is going to be one of the best developments in South Perth, a very rare opportunity to have 7,200 square metres of land to develop a brand new development to service the people of South Perth and of course provide new accommodation for the city."

The initial design features an extensive retail precinct, commercial offices, a new pedestrian plaza, and a landmark 30-storey residential tower that is expected to become Perth's tallest building outside the CBD.

"Being a South Perth resident myself, I know how much we need a decent sized retail precinct here and it will be exciting to create that, and what a fantastic opportunity to live in the building itself for the people to have a supermarket downstairs and easy access to the freeway system"

The site is located on a premium area of land in the heart of South Perth between Mill Point Road and Labouchere Rd, offering panoramic views for the residents of the proposed 295 apartments.

The development excludes the heritage listed post office building, while the former police station heritage building will be refurbished into a café tapas venue.

City of South Perth Mayor Sue Doherty says it will really activate the area, and the local community are extremely excited about it.

"It means we're going to be able to draw people into the area, through providing residential accommodation, more retail, and some of the community benefits of this development include a childcare centre and a gym, and it's going to be great".

The sale of Civic Triangle site was negotiated by Jones Lang LaSalle Director of Sales and Investment WA, Tom Nattrass.

He says the level of public amenities and the overall design of Finbar's proposed development played a big role in their decision.

"But underlying that was Finbar's development experience and capability, financial track record and so on in this type of development, so two strong aspects of their proposal.

The application for approval will be lodged by the end of the year, with the development expected to be completed by mid-2018.

Finbar's core business lies in the development of medium to high density residential apartments and commercial property within the state of Western Australia where it carries out its development projects in its own right or through incorporated special purpose entities and joint venture companies of which the Company either directly or indirectly holds interests in project profitability ranging between 50% and 100%.