OTCMKTS:BALMF) today reported results from the summer/fall 2015 drill program on the Company's wholly owned Martiniere Property in Quebec. In addition to results from infill and expansion drilling along the Bug Lake Gold Trend, the program has confirmed the discovery of a new, gold bearing, fault system - the Lac du Doigt ("Finger Lake") Fault Zone - which has the potential to extend for several kilometres across the Property.
Bug Lake Gold Trend

The recently completed drill program was successful in tracing the Upper and Lower Bug Lake Zones throughout all areas tested. It also continued to confirm the presence of high-grade gold mineralization in the Hanging Wall to the Bug Lake Fault along the northern segment of the Trend. The Hanging Wall Zone in this area had not previously been tested to depth and MDE-15-200 returned three high-grade intercepts - 32.10 g/t gold over 0.81 metres, 12.40 g/t gold over 1.03 metres and 13.95 g/t gold over 0.60 metres - between 210 and 240 metres down hole depth (see Table 1 below and Figure 1 in link).

Drill holes MDE-15-194 and -195 were drilled 600 metres south of the previously known southern margin of the Bug Lake Gold Trend. Hole MDE-15-195 intersected a broad - 18.50 metre wide - interval of faulting, silica-pyrite alteration and anomalous gold mineralization which is interpreted to represent the southern continuation of the Bug Lake Gold Trend. This extends the Trend to over 1,800 metres along strike and it remains open to the south.

Hole MDX-15-48 was collared approximately 185 metres east of MDX-14-46 and also intersected three intervals of anomalous gold mineralization, an upper vein zone and two lower porphyry hosted intervals, suggesting local continuity to the gold mineralized occurrences within the Fault Zone. The Porphyry 2 occurrence shows a significant broadening to the east over the 185 metres between the two holes. The Lac du Doigt Fault is untested west of these two holes. It is also untested for a 2.30 kilometre span between the current drilling and the northern end of the Bug Lake Gold Trend where there are indications of gold mineralization within the projection of this structure. The Lac du Doigt Fault Zone thus provides an extensive new, and largely untested, gold target on the Martiniere Property.

Exploration of the Martiniere Property is expected to resume in early 2016 with a focus on continued near surface delineation of the Bug Lake and nearby gold zones, further examination and testing of the Lac du Doigt Fault Zone and exploration of other gold targets on the property.

Mr. Darin Wagner (P.Geo.), President and CEO of the Company, is the non-independent qualified person for the technical disclosure contained in this news release. Mr. Wagner has supervised the work programs on the Martiniere Property, visited the property on multiple occasions, examined the drill core from the holes summarized in this release, discussed and reviewed the results with senior on-site geological staff and reviewed the available analytical and quality control results.

Balmoral has implemented a quality control program for all of its drill programs, to ensure best practice in the sampling and analysis of the drill core, which includes the insertion of blind blanks, duplicates and certified standards into sample stream. NQ sized drill core is saw cut with half of the drill core sampled at intervals based on geological criteria including lithology, visual mineralization and alteration. The remaining half of the core is stored on-site at the Company's Martiniere field camp in Central Quebec. Drill core samples are transported in sealed bags to ALS Minerals' Val d'Or, Quebec analytical facilities. Gold analyses are obtained via industry standard fire assay with atomic absorption finish using 30 g aliquots. For samples returning greater than 5.00 g/t gold follow-up fire assay analysis with a gravimetric finish is completed. The Company has also requested that any samples returning greater than 10.00 g/t gold undergo screen metallic fire assay. Following receipt of assays, visual analysis of mineralized intercepts is conducted and additional analysis may be requested. ALS Minerals is ISO 9001:2008 certified and the Val d'Or facilities are ISO 17025 certified for gold analysis. 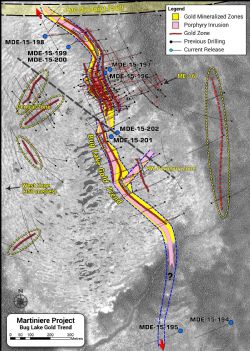