ASX:ABU) announce the Quarterly Activities and Cashflow Report for the period ending December 2015.

The Old Pirate Gold Mine is part of the Twin Bonanza Gold Project located in the Tanami region of the Northern Territory. Gold ore is extracted at Old Pirate by open pit mining and hauled for treatment to the Coyote Processing Plant, located over the Western Australian border.

Production statistics for the Old Pirate Gold Mine in the December quarter and project to date are summarised in the table below, with monthly performance since operations commenced presented in the graph in link below.

During the quarter a thorough review of operational performance at the Old Pirate Gold Mine was carried out, primarily focusing on the discrepancy experienced between mine estimated head grade and mill reconciled grade (ASX announcement 20 November 2015). Subsequently, a study was carried out to re-optimise open pit designs, revise mine plans and update production forecasts using operational data acquired since mining commenced. The main objective of this study was to improve overall economic performance by excising underperforming areas from the mine plan and, where possible, expand mining in areas of the deposits that were performing well.

The re-optimisation study did not result in significant modification of the original pit designs for Old Pirate. The principal changes involved final design depths of the Old Pirate Central and Old Pirate South pits being reduced by 10 metres and 25 metres respectively. It was concluded that cutting back the walls on any of the pits to extend mining at depth was not economically viable under current operating conditions.

A revised mine plan and production forecast were prepared (ASX announcement 24 December 2015) with mining and processing, including the recovery of gold in circuit, now scheduled to be completed by the end of April 2016. Rehabilitation of the Old Pirate mine site continues to be carried out concurrently with mining and is expected to be largely complete by the end of April 2016, when all mining equipment, leased infrastructure and accommodation will be demobilised. The Wilson's Exploration Camp at Twin Bonanza will be retained to support on-going exploration activities.

Significant technical data has been obtained from mining at Old Pirate leading to an improved understanding of the geology and mineralisation in the area. A major constraint on the existing operation has been haulage and processing costs associated with the small scale Coyote processing plant. There is considered to be scope to revisit Old Pirate and potentially develop a more extensive and financially robust mining operation if a larger scale, lower cost processing option can be established or otherwise accessed.

ABM's primary exploration focus is on the Tanami Region of the Northern Territory where the Company holds over 10,000 square kilometres of exploration licences and applications. During the quarter, ABM's exploration team continued to analyse data throughout the area to establish priorities for near-term exploration targeting. In particular, the Company has targeted the Hyperion project area where ABM's new discovery in the near surface at Hyperion East (ASX announcement 26 August 2015) intersected:

ABM intends to follow up this new discovery with further work during 2016.

The Lake Mackay / Warumpi Margin alliance is an alliance between ABM and IGO with IGO sole funding the current work. During the quarter ABM announced a number of significant precious and base metal intercepts at the Bumblebee Prospect, together with lower order gold intercepts on the Prowl and Springer prospects located within the Du Faur Project area (EL24915) on the far southern end of the Lake Mackay alliance area (ASX announcement 6 October 2015).

During the quarter IGO continued work and undertook detailed follow-up surface sampling across seven prospect areas including Bumblebee to provide better anomaly definition. This work has extended the anomalous footprint at Bumblebee both to the west and east. Tenement wide geological mapping of EL24915 and a petrographic and lithogeochemical study of rocks from outcrop and drilling were also completed during the quarter. This work will assist in characterising mineralisation style and the development of follow-up drill targets at Bumblebee. Drill follow-up is scheduled to commence in the June quarter 2016.

During the quarter IGO and ABM extended the exploration agreement over the Lake Mackay / Warumpi Margin Project areas for a further three years (ASX announcement 7 December 2015) and added a further 6 exploration licence applications to the alliance.

Subsequent to the end of the quarter IGO and ABM agreed to withdraw a large block of tenure north of the project area from the Alliance Agreement. The withdrawn tenements were previously the focus of a systematic surface geochemical program, generating a number of anomalies which were drill tested with no significant discovery. The project area now comprises one granted tenement covering 518 km2.

(EL29415) and eight exploration licence applications covering 5,534 km2 situated over a prominent gravity ridge along the margin of the Proterozoic Aileron and Warumpi provinces. The Bumblebee polymetallic discovery highlights the prospectivity of this largely unexplored region.

ABM relinquished most of the withdrawn tenements subsequent to the end of the quarter.

The North Arunta region is considered non-core to ABM's activities in the Tanami Region. As a result ABM continues to seek alliance partners for the highly prospective North Arunta region. Confidentiality agreements are in place and reviews are underway by four groups. The North Arunta region consists of multiple identified mineral occurrences with walk up drill targets for gold and base metals. The granted tenement holdings at Bonita and Walkeley (5,181 square kilometres / 8 licences) are considered early stage exploration with no drill ready targets were relinquished.

ABM's financial position at the end of the Quarter was $7.5 million in cash with an additional $0.5 million of gold in hand (sold subsequent to end of quarter). The Company has no debt.

The Company has a $7 million bond and guarantee facility with the ANZ bank which is drawn to approximately $3.8 million to cover performance bonds associated with the Old Pirate Gold Mine and a number of exploration sites. The ANZ has requested that the Company progressively cash back the performance bonds by depositing cash into a restricted account. Post quarter end the Company transferred $2.75 million into the restricted account. ABM is in discussions with another party in relation to establishing a bonding facility that does not require cash backing, which, if concluded would release all of the Company's cash reserves to be available for working capital.

The Company is reviewing asset values following the decision to cease mining at the Old Pirate Gold Mine and reduce non-core tenement holdings. As a result, potentially significant asset impairment charges will apply to the Old Pirate mine development and to the acquisition costs of exploration tenements being relinquished. Final audited numbers will be released with the half yearly financial results.

During the quarter ABM cancelled 333,067 shares following a share-buy-back to cover an employee loan from a former employee. The transaction was cash-neutral.

To view all figures and tables please visit:
http://media.abnnewswire.net/media/en/docs/ASX-ABU-751121.pdf 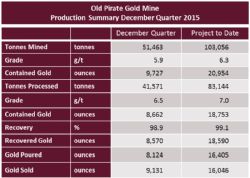 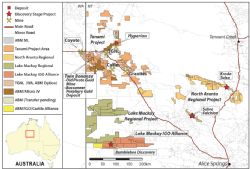