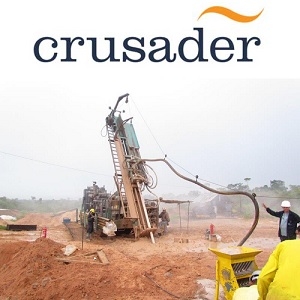 - Crusader has identified significant lithium potential from rock chip sampling on its 100% owned Manga prospect located in central Brazil, which will be transferred to the JV

- Memorandum of Understanding (MOU) to establish the JV, signed with Lepidico, an Australian exploration and mineral processing technology company that owns "L-Max", a patented technology to extract lithium from mica ores

- Historic sampling and mapping at Manga has described lithium-rich mica (zinnwaldite) and lithium muscovite with whole rock results of up to 1.8% Li2O

- Rock chip samples taken by Crusader in previous field seasons at Manga (targeting tin and indium) returned values of up to 1.3% Li2O

- Specific analysis in academic papers of Manga's zinnwaldite (Li-rich mica) and the Li-muscovite minerals, returned results of up to 3.6% and 2.3% Li2O respectively (these are not whole rock analyses)

- JV will have exclusive rights in Brazil to Lepidico's "L-Max" technology, and access to Lepidico mineral identification techniques for exploring for lithium.

- In addition to lithium, the L-Max technology generates sulphate of potash (SOP) as a salable by-product, which presents opportunities to generate a potential future revenue streams from the Brazilian agricultural sector.

- Crusader and Lepidico have already identified a significant mineralogical association between lithium mineralization and selected other elements, allowing for re-interpretation of Crusader's extensive in-country database.

Crusader's Managing Director Rob Smakman commented, "Crusader remains focused on its gold and iron assets, specifically the development of the Juruena Gold project. The MOU provides the opportunity to partner with Lepidico's technical team, access their patented L-Max technology and allow the Manga lithium project to be advanced through a joint venture structure.

In addition to the Manga project, the JV will hold exclusive rights to the L-Max process technology within Brazil. Given this opportunity, we are reviewing the other known lithium projects in Brazil, many of which may be appropriate to LMax.

We are pleased with this collaboration, matching Crusaders in-country expertise, with technical expertise specific to the processing of lithium and potentially potash in Brazil. Future actions of the partnership will seek to maximize the benefit to the shareholders of both JV parties."

The Manga Li Project (previously explored for tin and indium) is located in the NE of Goias state, Central Brazil. Crusader first applied for the ground when exploring for tin, indium and gold mineralisation in the region during 2007 and later mapped, soil sampled, rock chipped and drilled 15 reverse circulation holes (for 1,001m see Figure 1 in link below).

Drill results for the targeted tin and indium were modest, with better results including:

(Note that lithium was not directly tested in the drilling -nor the soil sampling program and that the samples were disposed of in 2012.)

(Please see the ASX Announcement from 17 September 2008 for a full list of drill results - available on Crusader website.) The previous rock-chip program conducted by Crusader was assayed for multi-elements and includes some significant Li20 results, as detailed in table 1 below. Li2O grades of up to 1.3% were returned, within a zinnwaldite-rich greisen zone, proximal to the anomalous tin and indium bearing greisen. The rock chip-sampling program was undertaken targeting tin and indium and returned results up to 5% tin and 750ppm indium, noting that the tin and indium mineralisation was hosted in a different greisenised zone from the proximal zinnwaldite-rich and Li-rich muscovite greisen zones.

Further to the fieldwork, a geological technical data review was undertaken and these described samples of zinnwaldite greisen and a li-rich muscovite greisen from Manga with results of up to 1.8% Li2O (Manga is also referred to as 'Mangabeiras or Mangabeiras Massif' see Botelho & Moura 1998 and Moura 1993- see references below). These academic papers also refer to specific analysis of the zinnwaldite and the li-rich muscovite minerals (referred to as Liphengite), with multiple analyses done on different mineral grains (from different rock samples). Results returned between 2.04% and 3.56% Li2O for the zinnwaldite and 1.55% and 2.32% Li2O for the Li-muscovite.

The literature also compares the geological setting and mineralisation style at Manga to the world-class Cinovec Sn, W, Li project in the Czech Republic, a project that has been mined for hundreds of years and is now being appraised for its lithium potential by fellow Australian listed explorer, European Metals (

Crusader has mapped various greisen's in the area over an extensive region and drilling also intersected different greisen facies. The soil sampling that was completed in 2007 was analysed with a hand-held XRF, which did not have the capacity to analyse the lithium content directly. Crusader has however, leveraging the technical experience of Lepidico, been able to use the historic XRF data to better understand the chemistry of the lithium mineralisation (based on Cinovec mineralisation style) and has been able to highlight exploration targets using certain other pathfinder elements, which are often associated with lithium mineralisation.

Lepidico developed its L-Max technology for the recovery of lithium from lithium bearing micas including lepidolite, zinnwaldite and polilithionite. The process technology has been rapidly developed including a continuous mini plant test treating >350 kg of lepidolite to produce >99.5% lithium carbonate. The process also produces a range of valuable by-products including potassium sulfate (SOP), a fertilizer for application in the agricultural sector.

Corporately, Lepidico has recently entered into a 1 month Exclusivity Agreement with Platypus Minerals (

ASX:PLP) to allow the parties to complete mutual due diligence for the purpose of investigating whether or not an agreement for the acquisition by Platypus of Lepidico or its assets can be agreed. Lepidico has indicated to Crusader, that Platypus is fully supportive of Lepidico signing this MOU.

Crusader and Lepidico have signed a MOU, which outlines the terms for the formation of a JV, with an aim to commercialise lithium projects in Brazil. The JV will have the exclusive right to use the L-Max technology in Brazil with the strategy to develop and hold a portfolio of royalty interests from sub-licencing the technology in addition to deploying it for Crusader's Manga prospect.

For Lepidico the JV presents an opportunity to expand its exploration activities into Brazil with a well-established incountry partner, and the potential to unlock considerable value through application its L-Max technology.

It is intended that the JV Company will be based in Perth and will conduct business on normal commercial terms and conditions. The form of the JV Company and its jurisdiction will be determined based on relevant tax, financial and legal considerations.

The primary assets of the JV will be:

(i) the Manga Lithium Project

(ii) all other lithium projects as identified, licensed and/or acquired within Brazil after the date of signing of the MOU; and

(iii) an exclusive licence of Lepidico's lithium extraction technology for any new projects in Brazil.

The JV Company will be responsible for all holding costs (including mines department, environment, taxes, rent, and work fees) for the Manga and other lithium projects in Brazil.

The parties agree on their relative equity ownership in JV company to be:

The JV remains subject to the execution of formal agreements and conditions precedent including respective board approvals. Crusader will keep the market updated on all material developments.

With the growth in investor interest in the lithium space, Brazil represents a unique opportunity for Crusader's shareholders to benefit from the company's extensive in-country experience and operating capacity.

The lithium market represents an exciting environment as many analysts predict higher future prices driven by the increase in demand for electrical vehicles and other lithium-ion battery uses where the number of new applications continues to multiply. Smart phones, tablets, laptops, and other consumer electronics demand more lithium. However, the largest driver for future lithium use will most likely be in electric vehicles and home batteries for solar panels.

Tesla Motors is developing a cheaper line of electric cars for release later this decade, and to achieve this it is constructing a $5-billion gigafactory to build 500,000 electric cars with the objective of lowering the cost of electric vehicles by at least 30 percent.

Tesla's biggest rival may be Build Your Dreams (BYD), a Chinese automaker backed by renowned investor, Warren Buffet. BYD also has global gigafactory ambitions and by the end of the year, according to Reuters, BYD should have 10 GWh of battery production capacity. Expansion on this capacity will be aided by a new factory in Brazil, currently under construction in Sao Paulo state.

In October 2015, the government of Brazil passed a bill that zeroed importation taxes for electric cars, and significantly reduced the importation taxes for certain hybrid cars. The Brazilian department of Mines has also declared Lithium as a strategic mineral due to its importance for high tech products.

The existing lithium reserves in Brazil have not been measured consistently, but there are known lithium ores in the country. These pegmatite hosted projects have been mined mainly as accessory minerals and to date, there appears to be minimal modern and systematic exploration for lithium.

In 2014, Brazil contributed ~400 tonnes of lithium to global output.

Crusader Resources Limited (ASX:CAS) is a minerals company focussed on the identification, acquisition, development and operation of projects in Brazil. Crusader believes that Brazil is a vastly underexplored country with high potential for the discovery of world class mineral deposits. The company has already acquired a diverse portfolio of projects including gold, iron ore, tin, tungsten and uranium and continues to utilise its strong networks in Brazil to identify new opportunities.

Crusader is characterised by a tight corporate structure and features an experienced board of directors who are strongly focussed on the success of the company. 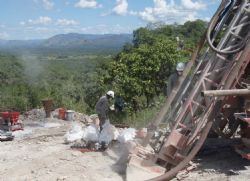 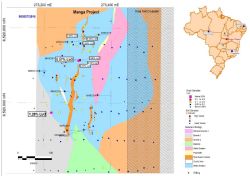 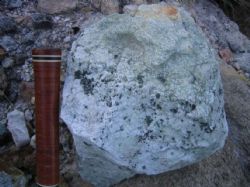 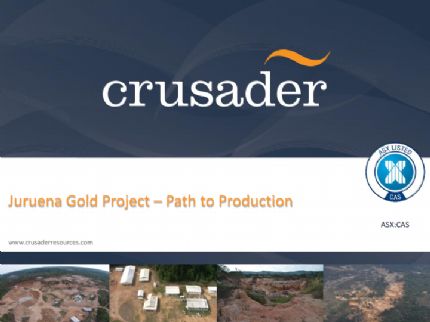