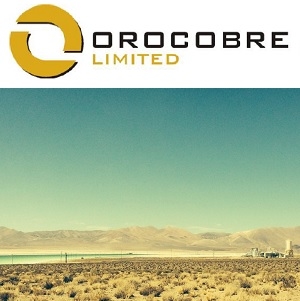 OTCMKTS:OROCF) is pleased to provide shareholders with an update on the Company and its projects, future direction and goals, the lithium market and current and future pricing.

To view the Interview with Richard Seville, please visit:
http://www.abnnewswire.net/press/en/83798/Orocobre

Richard Seville: Good to be here.

Carolyn Herbert: First up, can you give us a quick recap of the company and its projects?

Richard Seville: Orocobre is an ASX 300 company; we're also listed on the TSX. Our flagship asset is a lithium project up in the Puna, up in Northern Argentina in the province of Jujuy. We've been in production there for about a year. Our partner is Toyota Tsusho Corporation (

OTCMKTS:TSHOY), part of the Toyota Group collective of companies and we're in ramp up mode. And we're making very, very solid progress. Our other assets are boron assets in the province of Salta and we purchased these off Rio Tinto Minerals (

ASX:RIO), a few years ago. And we're just about to get the spotlight on those assets, as we now have more management bandwidth.

Carolyn Herbert: Can you provide us with an update on your progress since we last spoke, and where you're heading?

Richard Seville: We did 2,332 tonnes of production back in the first quarter and this quarter, we're on track to hit 3,000 tonnes. So our ramp up is clearly going in the right direction, and we expect to hit nameplate capacity in September. We finished all of the mechanical side of the de-bottlenecking process, back in January. And right now, it's all about getting optimum performance. It's about the optimisation of process, recoveries, reagent consumptions, availabilities and so on, getting the most out of the plant and our step-by-step improvement in production rate is testament to that process.

On the quality side, as James presented in Las Vegas last week, James Calaway our Chairman, in the week before he presented, we produced 86 per cent battery grade material and 14 per cent technical grade material. So I'm very happy with the way, where this plant's developing, it's good.

Carolyn Herbert: What can you tell us about the lithium market at the moment, and current and future pricing?

Richard Seville: Well it's a good place to be at the moment. And the reason for that is that although there's been strong demand growth over the last few years, the supply side really lagged it. As you'd be aware SQM (

NYSE:SQM) has got its problems with the Chilean Government, and shelved all expansion plans. Albemarle Corporation (

NYSE:ALB) was late with its expansion plans. And really the burden has fallen on us from the western world, to be the supply side response. And we're just not enough there.

So there's been in our time in exposure to the market, the market's moved from being relaxed from a customer point of view, to being very nervous on supply. And as we go forward, there's a great sensitivity about security of supply. The unknown for us really, or the area of uncertainty would be a better way to put it, is the dynamic in China. China's got a sector that's based on conversion plants and it's their capacity, and the delivery of spodumene concentrates into those that is the area of uncertainty, whether that can make up the supply that's necessary.

Carolyn Herbert: Is there any indication of how that flows into future pricing?

Richard Seville: Well that supply and demand balance certainly affects pricing. When we did the feasibility study, we used the long term pricing, which is the historical average of $5,500 a tonne. This quarter we should be receiving more than $7,500 a tonne. That's actually received into the operation, net of commissions and insurance and freight. And next quarter we're expecting to be north of $10,000 a tonne. And I think those firm pricing arrangements, or conditions are going to last some considerable time. You can look at the kind of forecast by Deutsche Bank, they're in excess of what we're talking about there, so a very good place to be entering the market.

Carolyn Herbert: Finally Richard, what are the company's goals over the next few months?

Richard Seville: Our principle objective remains to get to nameplate capacity at Olaroz. That's what we've been working for over the last year and a half, and that's our primary objective. And we're on track to do that, but at the same time, we're working on the growth aspects of the company. We've got more management bandwidth now; we've employed some people in management. And we're beginning two expansion studies.

The first is a scoping level study for Olaroz, looking at doubling capacity there and we'd hope to have the results on that at the end of the third quarter. And considering that, we'll be looking at the potential for producing lithium hydroxide as well as lithium carbonate.

And then with Borax Argentina, we have recalculated the resources we purchased from Rio Tinto Minerals. And we've got a very large resource base at Tincalayu.

This was work done in 2014 and we can scope the scale of a new project there for potentially, 120,000 tonnes of borax decahydrate, off a pretty modest capital investment. So that'll be feasibility level work and that should be completed in this coming half. So we've got a lot on.

Carolyn Herbert: Richard Seville thanks for the update on Orocobre.

To view the Interview with Richard Seville, please visit:
http://www.abnnewswire.net/press/en/83798/Orocobre