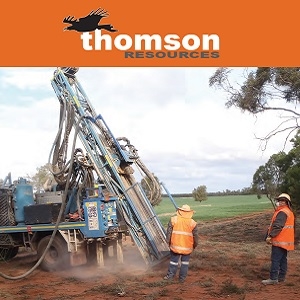 Record rain in central NSW during September has delayed plans to progress drilling at Bygoo and other tin prospects. Drilling is now expected to commence in November.

During the quarter Thomson Resources applied for a new Exploration Licence (ELA 5350) over an area south of Ardlethan, contiguous with Thomson's granted EL 8260 (see Figure 1 in the link below). The new area is host to a number of old tin workings in the Frews area, as well as several old gold shows further south.

Between 1978 and 1983 the Shell Company of Australia (Billiton division) drilled 1,302 holes in the 45 square kilometre area marked green on Figure 1 in the link below. The holes were shallow with an average depth of 20m and comprised 1,231 rotary air blast (RAB) holes testing unconsolidated soil and overburden to the top of hard rock, as well as 71 percussion holes and 3 diamond holes testing hard rock targets. Just 24 holes were deeper than 70m and all are shown on Figure 1 in the link below.

The program outlined several bedrock tin anomalies, marked pink on Figure 1 in the link below. There are three clusters, and all are close to the eastern outcrop edge of the Ardlethan Granite (like Bygoo to the north, Figure 2 in the link below). Two of the clustered bedrock anomalies are east of old workings at Bald Hill and Frews. The third is 3km south of the Ardlethan Mine leases and doesn't appear to have been followed up.

Shell targeted an Ardlethan deposit model of breccia pipes developed 500m to 1km east of the edge of the Ardlethan Granite. Hence there was very little drilling at and around any of the old (pre-war) tin workings. The only one tested appears to have been the Bald Hill/Maratholi group of tin mines (Figure 1 in the link below) where just two holes were directed under old workings. 28 percussion holes were drilled in the area and again were shallow, with an average depth of 34m (Table 1 in the link below). Several holes hit tin mineralisation with the better hits in PBH8 at Bald Hill (2m t 1.3% Sn from 12m), and the two holes under the Maratholi workings - PBH 15 (12m at 0.23% Sn from 14m) and PBH 16 (18m at 0.26% Sn from 36m). These intersections were not followed up. No drilling occurred around the Frews tin workings further south, or any of the other nearby old tin mines on the Ardlethan Granite (Canambla Park, Colorado, McKeowns) or the gold shows (Kennys, Mallee Hen).

In addition, Shell also discovered three alluvial tin deposits in palaeochannels (Figure 1 in the link below) - the southern extension of the Yithan Lead, a zone running north from Bald Hill and a smaller zone running southeast from Frews. Further work led Shell to declare a (pre-JORC) resource for the Bald Hill Lead.

The historic Bald Hill Lead alluvial resource was estimated in 1984 in a report by DJ Borton for Billiton (the Metal Division of the Shell Company of Australia), available from the NSW Government's DIGS public open file report system.

The historic resource was based on 51 RAB holes and 7 percussion holes drilled between 1982 and 1983. In general the sample interval was 2m and analysis was by laboratory XRF. Early samples were collected by grab handfuls, while later sampling was by splitting from a cyclone. The resource was calculated on eight individual sections with a 200ppm cut off. A specific gravity of 2 was assumed and the average depth to the top of the resource was estimated at 7m. The resource was not classified into JORC categories.

The relevance of this historic resource is that it is a significant deposit of tin thought to be sourced by weathering from an as yet undiscovered hard rock deposit in the Bald Hill area.

While the Company's focus is on hard rock tin discovery, it considers a modest program of re-drilling, density measurements and modelling would be required verify the resource and report to JORC 2012. The Company is not in possession of any new information or data relating to the historic estimate that materially impacts on the reliability of the estimates or the Company's ability to verify the historic estimate as mineral resources in accordance with the JORC Code.

The NSW Government awarded two grants to Thomson from the New Frontiers Cooperative Drilling program Round 2. Thomson was awarded $170,000 direct drilling support for two projects - Mt Jacob and Cuttaburra. Drill holes must be completed by the end of June 2017 and will be scheduled prior to that date.

Thomson is exploring 640 square kilometres over seven granted titles, with an interest in seven other tenements (472 square km) under joint-venture arrangements with companies including Kidman Resources (

Exploration expenditure incurred during the quarter totalled $32,000. Cash at the end of the quarter was $67,930. An $81,615 grant for eligible Research and Development activities under the Commonwealth Governments R & D Tax Incentive scheme was received in October. 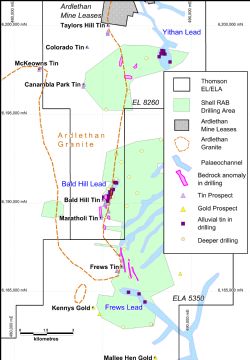 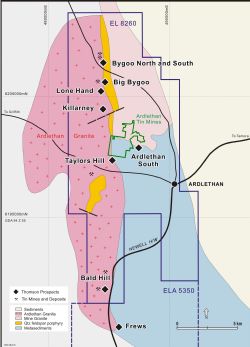