ASX:TMZ) is pleased to provide the Company's Quarterly Activities Report for the period ended 31 December,2016.

- A fourth drilling program at Bygoo

In December 2016, Thomson Resources carried out follow-up drilling at the Bygoo prospects. Nine holes were drilled for an advance of 1,000 metres before rain forced an abandonment of the program. Assay results are expected in February 2017.

The holes were targeted to define the extent of the known mineralisation at Bygoo South (see Figure 1 in the link below), identify mineralisation at Bygoo Central, and test an offset in the mineralised trend at Bygoo North (see Figure 2 in the link below). Previous drilling at Bygoo North identified a possible 20m offset in the main greisen zone and the follow-up drilling was designed to verify this apparent offset.

The drilling program will be resumed once the assay results have been received and interpreted.

Preliminary results from metallurgical analysis have been received. A bulk sample of 26.3 kg sample taken from drill hole BNR0011, interval 51-52m, was processed at the ALS laboratory in Burnie, Tasmania. The laboratory summarised the results of their testing as:

- The >0.425mm (coarse) fraction required a regrind to improve liberation of Sn.

- Gravity concentrates contain fluorine (sourced from topaz). This would need to be reduced as fluorine is a penalty in tin concentrate.

- It is likely that the product can be dressed to remove topaz using flotation.

Thomson has interests in 14 granted ELs and one EL application covering 1316 square km in total. Ten of these covering 982 sq.km have been farmed out in joint-venture arrangements with companies including Kidman Resources (

Significant progress was made by Silver City Minerals, who drilled a hole at the Wilga Downs prospect (EL 8136) to a depth of 426.8 metres, after conducting gravity and detailed ground electromagnetic surveys. The hole intersected a siliceous shear zone with abundant chlorite, sericite and graphite hosting stringers and veinlets of iron and copper sulphides. Downhole EM is planned as the hole is thought to have passed to the south of the main anomaly.

Exploration expenditure incurred during the quarter totalled $62,000. Cash at the end of the quarter was $105,000. An $81,615 grant for eligible Research and Development activities under the Commonwealth Governments R & D Tax Incentive scheme was received in October. In addition a joint venture contribution of $80,000 was received post quarter-end. This is the first of a number of payments expected during 2017 under the recently announced (21 November 2016) Bygoo Farm-In Agreement. 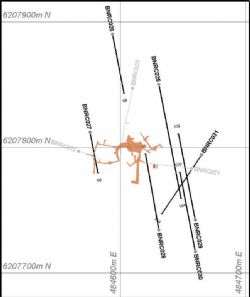