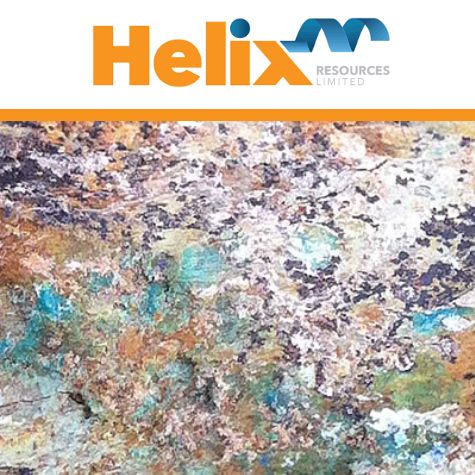 ASX:HLX) is pleased to provide an update with regard to its ongoing activities at the Cobar Gold Project in NSW.

- A regional structural review of the Cobar Gold Project supports the potential for a large gold system.

- The structural controls noted by the review have strong affinities with the nearby Peak Gold trend, which hosts ~4Moz of gold over 8 kilometres of strike.

- The goldfield has potential to be more extensive than previously recognised and the known prospects (Battery Tank, Good Friday, Sunrise and Boundary) may be linked based on this new interpretation.

- Diamond drilling has been completed at Battery Tank, Good Friday, Sunrise and Boundary Prospects. 8 holes (710m) have tested the northeast trending structures at each prospect.

- Following detailed logging, assays from the first core hole, the extension of HRDD003 at the Good Friday Prospect has been received, expanding the high-grade gold intercept in the hole by 10m.

- Results for assays for the remaining holes are still awaited.

- New target zones have been identified and auger soil grids over these zones to test for prospective geochemistry are underway. Approvals for a follow-up RC drill program targeting additional northeast structures in the known prospects, as well as first-pass drilling targeting similar structures in the new target areas, are also underway.

In conjunction with the recent diamond drilling program, Helix has carried out a regional and prospect scale structural review at the Cobar Gold Project with the assistance of an experienced geological and structural consultant.

Preliminary findings from this work, combined with a review of the detailed geology and structural information logged from the recent diamond program, indicates potential for a large gold system to be present at the Cobar Gold Project.

The regional structural review has illustrated similarities between the mineralising controls in the nearby Peak gold trend, which hosts around 4Moz of gold over an 8 kilometres strike length and the gold mineralising structural controls present within the Cobar Gold Project (refer Figure 1 in the link below).

The Peak gold trend is located along the limb of the Narri Anticline which hosts significant known gold deposits.

This observation and interpretation, in association with existing high grade gold mineralisation in similar structural positions to gold deposits within the Peak gold trend supports Helix's view that the Company's Cobar Gold Project may be host to a larger gold system than previously thought.

A key preliminary finding from the structural review is the presence of a series of northeast trending quartz vein arrays and breccia zones within the known prospects (Battery Tank, Good Friday, Sunrise and Boundary).

These zones appear to control high-grade gold in broader northwest mineralised corridors throughout the goldfield (refer to Figure 2 in the link below).

This new structural interpretation and planned follow-up drilling has the potential to improve the overall grade tenor throughout the known prospects in the goldfield (Battery Tank, Good Friday, Sunrise and Boundary), particularly if paralell repeats of the northeast structural zones continue to contain improved grades and widths of gold mineralisation.

The new targets include some zones northwest of the current prospects, where previously untested historic gold workings are present. These additional targets increase the known footprint of the goldfield to an area exceeding 10km in length and 5km wide.

These new regional targets are being prioritised with geochemistry, structural interpretations and ground-based mapping of alteration and geology. It is planned that these newly identified areas will be subject to first-pass drill testing in the second quarter.

Following detailed geological and structural logging of the holes, the first assays received from the program are from the extension of HRDD003 at the Good Friday Prospect.

This interval includes two zones of high-grade gold located higher in the hole that were previously reported in the first 57.8m of the hole, drilled in the December quarter of 2016.

The extensional drilling of HRDD003 has increased the high-grade zone at the Good Friday Prospect by approximately 10m.

The remaining diamond holes from this program have been subject to detailed geological and structural logging, with the core transported to the laboratory for cutting and assay (refer Table 2 in the link below).

This drill program has visually confirmed the presence of northeast controlling structures at each of the known prospects.

It is interpreted that quartz veining and brecciation appears to have a strong influence on higher grade gold mineralisation within the broader northwest shear zones evident throughout the goldfield.

The assays for these outstanding drill holes are expected shortly, with all the drilling information to be compiled and integrated into the evolving geological model for the Project.

The Company is planning and will commence follow-up RC drill programs as soon as necessary approvals are received.

These drill programs are planned to:

- test both, potential strike extensions and target interpreted repeats, of the high-grade geological controls at the known Prospects (Battery Tank, Good Friday, Sunrise and Boundary); as well as

Managing Director Mick Wilson said: "The visual recognition of high-grade gold controls at each of the known prospects at The Cobar Gold Project, plus the identification of new areas beyond the four known prospects is highly encouraging. The gold results to date and the increased field activities planned over the coming months are anticipated to fast-track our understanding of this emerging gold camp".

He added, "the regional structural review has also covered the Company's Collerina Copper Project. Preliminary outcomes emerging from the review are providing an insight into a potential re-interpretation of the Collerina copper deposit's geometry and the wider picture for the VMS trend being targeted by Helix. The VTEM modelling and structural review will also direct upcoming drilling programs at Collerina."

Helix Resources Limited (ASX:HLX) is a successful minerals exploration company focused on the identification, acquisition and development of projects in prospective jurisdictions with established infrastructure.

The Company's main focus is the exciting Collerina Copper-Zinc & Cobar Gold Projects both located in Central NSW. The Company's key objective for 2017 is to advance these discoveries.

Helix's Board and Management team are focused on creating opportunities to increase shareholder value from the quality assets in the Company's project portfolio. 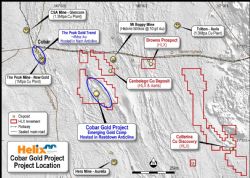 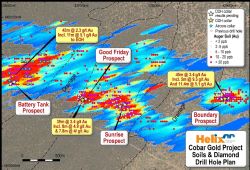 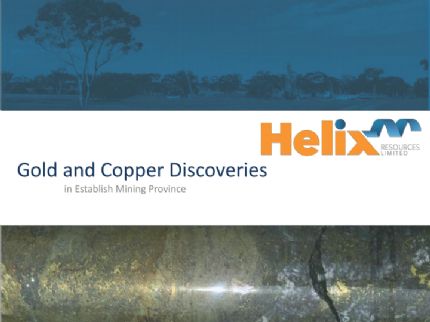