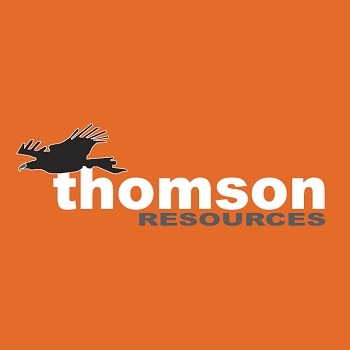 ASX:TMZ) are pleased to provide the Company's latest Quarterly Activities Report for the period ending March 2017.

As advised in Thomson's release to the ASX of March 17, the Company is progressing the closure of funding for the next round of drill testing at the Bygoo Tin Project. This process is continuing through Canadian Securities Exchange approvals with the Company confident of completion, and a significant cash injection, in the next few weeks, as per the terms of the Farm-In agreement.

Planning for the next drilling round is well advanced and is scheduled to commence shortly after completion.

Thomson's EL application for ELA 5350 was granted during the quarter. As detailed in the Company's ASX release of 16 September, 2016 the EL area covers the southern end of the tin-bearing Ardlethan granite, including several historic tin workings which have not been tested in modern times.

The area also extends further south to cover several promising gold occurrences including the historic mines at Mallee Hen and Harry Smith. While Mallee Hen has not had any modern exploration, drilling at Harry Smith in 1995 achieved a best result of 25m at 2.2 g/t Au from 16m depth and follow up drilling is warranted.

This EL is part of the Bygoo Farm-in agreement and will be funded as such.

Thomson has interests in 15 granted ELs covering 1316 square km in total. Ten of these covering 982 sq.km have been farmed out in joint-venture arrangements with companies including Kidman Resources (

Silver City continued exploration at the Wilga Downs prospect (EL 8136). A downhole electromagnetic survey was conducted within the recent hole 16WD02 and was modelled in conjunction with airborne magnetic data. The modelling showed two distinctive and separate off-hole plates, potentially representing massive copper and iron sulphide conductors. The downhole structural data obtained from the hole suggests it was drilled at an oblique angle the dominant structural trend and may not have been an optimal test of the target. The centre of the magnetic anomaly and two others to the west and east have not been adequately tested by drilling. Further drilling is being considered.