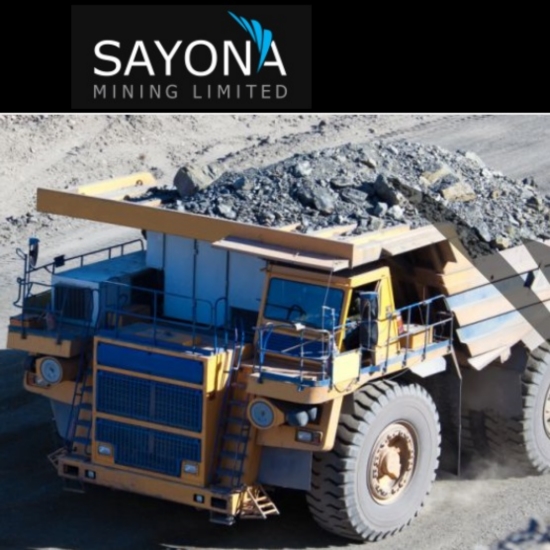 OTCMKTS:DMNXF) announced today the expansion of its emerging Tansim Lithium Project, with the Company acquiring an additional 39 claims spanning 2,234 ha amid the resurgence of Quebec's lithium sector.

The Tansim project now comprises 282 mineral claims encompassing 15,998 ha of prospective lithium acreage (including claims 100% owned and some under option agreements - refer appendix in link below), with the project located around 80 kilometres south-west of Sayona's flagship Authier project.

Previous exploration by Sayona since 2018 has highlighted the project's potential to host a valuable new lithium deposit. Drilling conducted last year resulted in an Exploration Target (refer note below) for the Viau-Dallaire prospect of between 5 million and 25 million tonnes, at an estimated grade of 1.2 - 1.3% Li2O (refer ASX release 19 November 2019).

A recent surface reconnaissance survey has highlighted a potential eastern extension of the mineralised pegmatite trend within the new mineral claims, marked by outcropping pegmatites with potential lithium mineralisation.

Following its recent successful fund-raising (refer ASX announcement 22 July 2020), Sayona plans to undertake further exploration work at Tansim, including reconnaissance sampling at the new mine tenure area and Phase 2 drilling at the Viau-Dallaire prospect, where a 2,000m drilling program will test the Exploration Target defined after Phase 1 drilling.

Sayona's Managing Director, Brett Lynch said the project could form part of the Company's planned strategic lithium hub for Abitibi, including the Authier project and potentially North American Lithium (NAL) (subject to a successful bid by the Company).

"While Tansim is still at an early stage, initial results have been promising and we look forward to exploring the project's potential further," he said.

"Tansim's geographical proximity to Authier and NAL would allow it to form part of a lithium hub of three spodumene mines supplying a central concentrator, enabling Sayona to become a world-scale spodumene producer supplying the North American battery sector."

The expanded acreage at Tansim also follows research showing Quebec's advantages as the economic, strategic and environmental supplier of choice for the North American battery market. Research by EYParthenon has shown that Quebec can deliver lithium hydroxide to Cleveland, USA at least 20% cheaper than alternative overseas suppliers, while on a CO2 emissions basis Quebec projects are by far the 'greenest' and most efficient source of lithium supply.

Strategically, Canada is already a key supplier of critical minerals to the United States, with the growing production of electric vehicles and accompanying battery production providing increasing markets for lithium hydroxide. North America requires an additional 10 x 20 kilotonne (Kt) hydroxide processing "trains" and 12 x 150Kt spodumene mines by 2030 just to satisfy its EV demand, according to the analysis.

Quebec's competitive advantages also include access to economical and environmentally sustainable hydropower, together with world-class infrastructure and skilled mining labour in a transparent regulatory environment.

The current transformation of the province's lithium industry, including the court-ordered restructuring of Nemaska Lithium together with NAL, should further enhance its long-term sustainability and profitability. "Sayona is confident that Quebec's advantages will make it a winner in this key industry of the 21st century," Mr Lynch said.

"Our expansion plans both in Canada and Australia will ensure our Company emerges from this revival with some outstanding assets and we look forward to unlocking their potential for the benefit of all stakeholders."